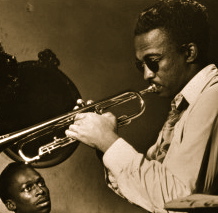 May 12, 1942, New York City The Three Deuces, Art Tatum ℗ Tiny Grimes (g) Slam Stewart (b): Tiny´s Exercise – variations. I hope my friend Mark Cantor will understand this upload in connection and for comparation with the following upload of the same then “complete” item http://youtu.be/pS61jZbsUAg as audio-part of March 1943 Jubilee No.17 part-2 where I used this screen part backing that audio-track to give an impressiom of that great historical Trio found together in club “Streets of Paris” L.A.early 1943. 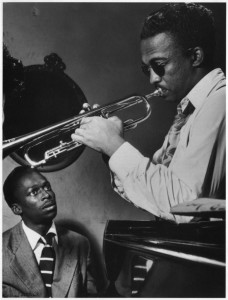 Following the repeal of Prohibition in 1933, 52nd Street replaced 133rd street as “Swing Street” of the city. The blocks of 52nd Street between Fifth Avenue and Seventh Avenue became renowned for the abundance of jazz clubs and lively street life. The street was convenient to musicians playing on Broadway and the ‘legitimate’ nightclubs and was also the site of a CBS studio. Musicians who played for others in the early evening played for themselves on 52nd Street. 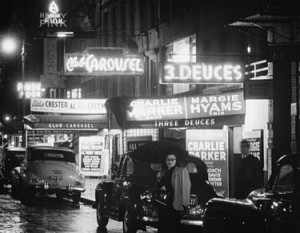 Virtually every great jazz player and singer of the era performed at clubs:

By the late 1940’s the jazz scene began moving elsewhere around the city and urban renewal began to take hold of the street. By the 1960’s, most of the legendary clubs were razed or fell into disrepair. The last club there closed its doors in 1968. Today, the street is full of banks, shops, and department stores and shows little trace of its jazz history. The block from 5th to 6th Avenues is formally co-named “Swing Street” and one block west is called “W. C. Handys Place” 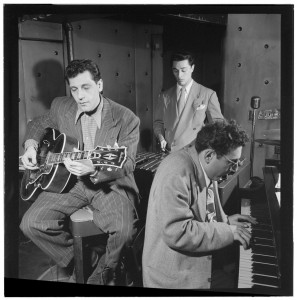 The 21 Club is the sole surviving club on 52nd Street that also existed during the 1940’s. The venue for the original Birdland at 1674 Broadway (between 52nd & 53rd), which came into existence in 1949, is now a “gentlemen’s club.” The current Birdland is on 44th Street, between 8th and 9th Avenues.