You are here: Home / Education / Women Who Made History / The racism in Trump’s attacks should be impossible to deny But for many media outlets and politicians, it somehow wasn’t. by P.R. Lockhart

The racism in Trump’s attacks should be impossible to deny But for many media outlets and politicians, it somehow wasn’t. by P.R. Lockhart 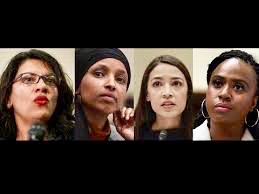 In the day since President Donald Trump issued a series of racist tweets claiming that four Democratic women of color in Congress should “go back and help fix the totally broken and crime infested places from which they came,” the president’s history of racism has been back in the media spotlight.

“So interesting to see ‘Progressive’ Democrat Congresswomen, who originally came from countries whose governments are a complete and total catastrophe, the worst, most corrupt and inept anywhere in the world (if they even have a functioning government at all), now loudly and viciously telling the people of the United States, the greatest and most powerful Nation on earth, how our government is to be run,” Trump tweeted on Sunday.

His attacks on the congresswomen extended into Monday, with the president claiming that the women owe the country an apology for their “horrible & disgusting actions.” At a press conference later in the day, Trump argued that he wasn’t concerned about backlash to his remarks or his use of a long-used racist trope. “It doesn’t concern me because many people agree with me,” he said. “And all I’m saying — they want to leave, they can leave. Now, it doesn’t say, ‘Leave forever.’ It says, ‘Leave if you want.’”

The targets of Trump’s ire have mostly gone unnamed, but the remarks seem to be clearly addressing Reps. Alexandria Ocasio-Cortez (D-NY), Rashida Tlaib (D-MI), Ayanna Pressley (D-MA), and Ilhan Omar (D-MN). Each is a progressive woman of color serving her first term, and all have attracted considerable attention for their outspoken critiques of DC politics in general and the president in particular. In recent days, some of the women — at times referred to as “the squad” by reporters — have been locked in a fight with Democratic leadership over a recent border bill and the direction of the Democratic Party.  To read more go to the link below: