You are here: Home / Democracy Now! / Media / The Internet’s Own Boy

The Internet’s Own Boy 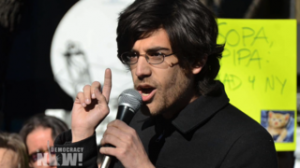 One year ago this month, the young Internet freedom activist and groundbreaking programmer Aaron Swartz took his own life. Swartz died shortly before he was set to go to trial for downloading millions of academic articles from servers at the Massachusetts Institute of Technology based on the belief that the articles should be freely available online. At the time he committed suicide, Swartz was facing 35 years in prison, a penalty supporters called excessively harsh. Today we spend the hour looking at the new documentary, “The Internet’s Own Boy: The Story of Aaron Swartz.” We play excerpts of the film and speak with Swartz’s father Robert, his brother Noah, his lawyer Elliot Peters, and filmmaker Brian Knappenberger.

AMY GOODMAN: We’re broadcasting from Park City TV in Utah, home of the Sundance Film Festival, the largest festival for independent cinema in the United States. This is our fifth year covering some of the films here, and the people and topics they explore.

Today, we spend the hour with the people involved in an incredible documentary that just had its world premiere here yesterday. It’s called The Internet’s Own Boy: The Story of Aaron Swartz. It comes as Aaron’s loved ones and friends mark the first anniversary of his death. It was just over a year ago, on January 11th, 2013, that the young Internet freedom activist took his own life. He was 26 years old. This is a clip of Aaron Swartz from the film.

AARON SWARTZ: I mean, I, you know, feel very strongly that it’s not enough to just live in the world as it is, to just kind of take what you’re given and, you know, follow the things that adults told you to do and that your parents told you to do and that society tells you to do. I think you should always be questioning. You know, I take this very scientific attitude that everything you’ve learned is just provisional, that, you know, it’s always open to recantation or refutation or questioning. And I think the same applies to society. Once I realized that there were real, serious problems, fundamental problems that I could do something to address, I didn’t see a way to forget that. I didn’t see a way not to.

AMY GOODMAN: That was Aaron Swartz in his early twenties. By that time, Aaron was already an Internet legend. At the age of 14, Aaron helped develop RSS, Really Simple Syndication, which changed how people get online content, allowing them to subscribe to different sources of information like blogs and podcasts. He also helped develop the Creative Commons alternative to copyright, which encourages authors and publishers to share content. He founded a company, Infogami, that merged with Reddit, which allows users to collectively rank and promote contributed content, is now one of the most popular websites globally.

In 2010, Aaron Swartz became a fellow at Harvard University’s Edmond J. Safra Center for Ethics. It was around this time that he used the Internet at nearby MIT, the Massachusetts Institute of Technology, to download millions of digitized academic articles run by a nonprofit company calledJSTOR. Aaron believed the articles should be freely available online. Although Aaron did not give or sell the files to anyone, the federal government filed multiple felony charges against him. At the time he committed suicide, Aaron was facing 35 years in prison, a penalty supporters called excessively harsh.