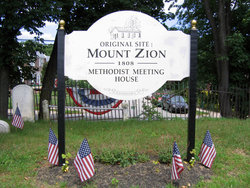 Thomas Hooper was a soldier, founder and minister. He was born in Valley Hill, PA on January 28, 1840. He worked and attended school at West Chester, PA.
On June 30 1863 he enlisted in Company B3, USC Infantry at Philadelphia. He was a member of the first Black Troop of Philadelphia that was organized on August 3-10, 1863 at Camp William Penn near Philadelphia. He was honorably discharged in October 1865. A brief history of the heroic USC 3rd Regiment Infantry is included in this newsletter. We do not know his exact death date but he is buried at Darby Methodist Meeting Cemetery next to his mother, Rosalind E. Hooper, at the front of the cemetery next to the fence.

A U.S. Government grave marker was ordered by the Friends of Darby Methodist Meeting Cemetery and installed by members of the FDMMC and the William S. Griefzu VFW Post #598 Darby, PA. The old Civil War marker is still on his grave. Rosalie M. Green of Lansdowne, PA and William Green of Philadelphia, his Great, Great niece and nephew, and other members of his family provided the Friends with the history of his Regiment.

Upon returning home from the war he worked on his father farm and then moved to Philadelphia in 1866. In Philadelphia he joined Mt. Piagah A. M E. Church. He was ordained a Minister at Mt. Piagah Church. He helped build his home in the vicinity of Greenway Avenue. In 1868 he organized the Hooper Mission in the vicinity of his home. On June 30, 1870 Rev. William Norris at Ebenezer Methodist Episcopal Church, near West Chester, PA, officiated at his marriage to Eleanor Lee. The Hoopers had eleven children.

Pvt. Thomas Hooper not only served his country in the military he also served with his contributions to the welfare of his community and his leadership and good works in behalf of others. We remember and honor him and thank him for his bravery, courage and service in behalf of our country.

Regimental Colors presented to 3rd Regiment U. S. Colored Troops 11/17/1863
Organized at Camp William Penn near Philadelphia, PA on August 3 thru 10, 1863 the First Colored Troop of Philadelphia, Third Regiment Infantry, was ordered to the Dept. of the South until October 1864 and to the 4th Separate Brigade, District of Florida, Department of the South until July, 1865.

They served in the Siege of Forts Wagner and Gregg, Morris Island, S. C. from August 20th through September 7, 1863 and then operations against Charleston from Morris Island until January 1864. They then moved to Hilton Head, S. C. and hen to Jacksonville, Florida from February 5-7 and duty there as Heavy Artillery till May 1865 (First Company at Fernandina Florida), expedition from Jacksonville to Camp Milton, May 31 through June 3, 1864. Next was Front Creek on July 15 and Bryan Plantation on October 21 and duty at Tallahassee, Lake City and other points in Florida from May to October 1865.

This colored regiment was the first to be organized at Camp William Penn. Its Colonel was Benjamin C. Tilghman, who had commanded the 26th Pennsylvania until he was wounded at Chancellorsville. While the Regiment remained in camp, representatives of the Supervisory Committee presented a large and handsome American flag to the Regiment on the afternoon of July 29, 1863.

The Regiment left Philadelphia on September 18, 1863, having been assigned to the Tenth Corps, which was attempting to recapture the city of Charleston, S. C. Upon it arrival, the 3rd was used in the siege of Fort Wagner, losing six men killed and twelve wounded.

Early in 1864 the Regiment was transferred to the District of Florida, where it was assigned to the defenses of Jacksonville, remaining there until the end of the war. While garrisoning this city, the 3rd was trained as heavy artillery and participated in 2 an occasional foray into the surrounding countryside. After the Confederate surrender, the 3rd moved to Tallahassee and other points as garrison troops until mustered out of service on October 30, 1865. The 6th Colored Regiment that trained at Camp William Penn lost 62% of its men during an assault on New Market Heights, near Richmond. Two of its members received the Congressional Medal of Honor for gallantry.

Under the aegis of the Supervisory Committee, a Committee of Ladies from Philadelphia presented a regimental flag to the regiment on the evening of November 17, 1863. Since the 3rd was already on active duty at Charleston, Lt. Colonel, Louis Wagner Commandant of Camp William Penn, accepted the flag for the absent Regiment. The presentation ceremony took place at Sansom Street Hall and began with addresses by two local supporters. As a brass band played the Star Spangled Banner, the flag brought on stage and unfurled. A Newspaper Reporter recorded that the cheering became so intense that the music was scarcely heard.1 The flag was then officially presented to the 3rd and received by Lt. Colonel Wagner.

This Regimental Flag was painted by Mr. Bowser and was said to have cost $150.00.3 Colonel Wagner briefly described the flag in a letter he wrote to Colonel Tilghman a week after the presentation. He wrote, It is a magnificent banner, regulation size, of fine blue silk with coat of arms of the United States and name of regiment one side and a painting finely executed of the Goddess of Liberty presenting a flag of color and colored Sergeant on the other side. It is unknown exactly when the Regiment received this flag. Wagner was unsure where to send it and still retained it when he queried Colonel Tilghman in January 1864.5

Congratulations to VFW Post #598 in Darby. Organized in 1920, it is the oldest VFW in Delaware County. It is named for William C. Greifzu a very young man that died in WWI and is buried in France. His family lived in Colwyn and some of his family members are buried in Old Mt. Zion Methodist Meeting Cemetery, now named Darby Methodist Meeting Cemetery.

Post #598 assisted the Friends of the Cemetery with some of the restoration of the old cemetery that was abandoned for over 60 years. VFW members have climbed the hill on Springfield Road to conduct Memorial Day Services since its inception as a VFW Post. Post #598 has performed a great patriotic service by continuing the tradition of Memorial Services that have been held at this old cemetery since 1808.

We thank VFW Post #598 for 90 years of service, honor and devotion to their country and for their service, honor, devotion and caring for those that served and their families. Congratulations to their members for 90 years of service to our community. Thank you VFW for remembering Veterans that lie in the cemeteries of our community and for supporting our military presently serving. We thank all Veterans and Post members for the sacrifices you made in our behalf.

GOD BLESS AMERICA!
3 DUES TIME AGAIN!
WE NEED YOUR HELP!
We have come so far and accomplished so much but without your help we will not be able to sustain the restoration of Old Mt. Zion Methodist Cemetery It has been an exciting year to see the project move forward, publish our book, and participate in the Lincoln Bicentennial but expenses are not covered completely and grants are few. We sincerely hope that our Commonwealth and Federal Officials will value the history we have uncovered as an enhancement of our community and for education of future generations.

It has not been easy for our Board of Directors to support most of the expenses during the past 10 years. Landscaping (mowing/trimming) is a big expense. Last year it was about $3600 and some of that was funded by Board Members. Unfortunately, this cannot continue. Over the past 10 years a few members of the Board have supported additional expenses and mowing. Everyone worked very hard and we are proud of the results. It would be appreciated if members that have connections for potential sponsors would let us know.

We want you to know that we have made application to place DMMC on the National Register of Historic Places. The history found in our research and the history of the property itself is of significant historic importance concerning the history of the United States.

The original Darby settlement in August of 1681 is one of the oldest communities on the East Coast of the United State. Darby was here before Pennsylvania was a state and its Founder, John Blunston, helped William Penn create Pennsylvania. Darby was an important town. During the Civil War Mt. Zion Methodist Meeting members were very involved in the abolitionist movement. We have documented 81 Civil War soldiers buried at Mt. Zion. There are more. Many of Abraham Lincoln cousins are buried at Mt. Zion and he visited his cousins here.

There is so much more! We included about 35 DMMC historically significant persons in our application for the National Register. Please ask local officials at all levels to advocate for the approval of this nomination. Our history is disappearing at an alarming rate. It is hard to think that 329 years of United States History would be lost because our government did not support the preservation of our historic sites. We discovered on April 11 when we started Spring cleanup that almost all of the Lincoln family tombstones had been vandalized and were lying on the ground. We hope our local Police can help.

This is an urgent appeal to all of the Friends of DMMC to help in any additional way possible. You have been very helpful, encouraging and supportive. We thank you! PLEASE PAY YOUR DUES AND SEND US INFO ON YOUR FAMILIES AT DMMC. DUES ARE $25.00, DUE JUNE 1, 2010. MAKE CHECK PAYABLE TO:. FDMMC AND MAIL TO:J. KARL THOMAS, TREASURER, FDMMC, POB 478 , GLEN RIDDLE PA 19037-0478

PENNSYLVANIA IS CELEBRATING CIVIL WAR HISTORY DURING THE NEXT TWO YEARS

We hope to participate and share the history of the families and veterans buried at DMMC and Darby part in the Civil War. We look forward to honoring the soldiers that died during those years and to relating the story of our community during the Civil War years. Families will be able to contribute to displays and share their Civil War stories. We plan to sponsor lectures by Civil War Historians and other activities. Old Borough Hall in Darby was used as an encampment for two Companies during the war and was a recruitment center. One of the first GAR Posts was Major M. A. Gherst, Camp #51 that met at Old Borough Hall. Many of the veterans buried at Mt. Zion were members of that Post. Civil War Depots were located in Darby.