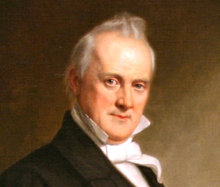 James Buchanan, Jr. (April 23, 1791 – June 1, 1868, English pronunciation: /bjuːˈkænən/) was the 15th President of the United States (1857–1861). He is the only president from Pennsylvania and the only president who remained a lifelong bachelor. His niece Harriet Lane played the role as lady of the house.

Buchanan (often called Buck-anan by his contemporaries) was a popular and experienced state politician and a successful attorney before his presidency.  He represented Pennsylvania in the U.S. House of Representatives and later the Senate, and served as Minister to Russia under President Andrew Jackson. He was also Secretary of State under President James K. Polk. After turning down an offer for an appointment to the Supreme Court, President Franklin Pierce appointed him Minister to the United Kingdom, in which capacity he helped draft the controversial Ostend Manifesto.