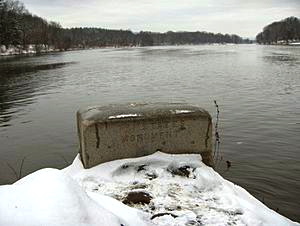 The original boundary line between New York and Pennsylvania extended from the northwest corner of New Jersey along the center of the Delaware River to 42 degrees north latitude, and thence due west to Lake Erie. Samuel Holland, on the part of New York, and David Rittenhouse, on the part of Pennsylvania were appointed commissioners on November 8, 1774, to run the line; but, as happened in the cases of other boundary commissions, the impending Revolution prevented the work from being pursued to completion.

The boundary line was not delineated until 1785-86, the line then being run westward to the ninetieth milestone. This survey was certified on October 12, 1786, by James Clinton and Simeon Dewitt, of New York, and Andrew Ellicott, of Pennsylvania. By authority of the State Legislature, the New York delegates in Continental Congress on March I1 1786, released to the general Government all the lands to which they had claim west of a meridian extending through the western extremity of Lake Ontario. The triangular tract so surrendered was sold to Pennsylvania for $151,640 and secured to those State 30 miles of water frontage on Lake Erie and an excellent harbor. The line was surveyed by the United States surveyor-general in 1786-89.