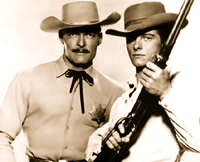 This is the Lawman TV series season one episode one, the deputy short clip.

Lawman is an American western television series originally telecast on ABC from 1958 to 1962 starring John Russell as Marshal Dan Troop and featuring Peter Brown as Deputy Marshal Johnny McKay. The series was set in Laramie, Wyoming during 1879 and the 1880s. Warner Bros. already had several western series on the air at the time, having launched Cheyenne with Clint Walker as early as 1955. The studio continued the trend in 1957 with the additions of Maverick with James Garner and Jack Kelly, Colt .45 with Wayde Preston, and Sugarfoot with Will Hutchins. One year later, Warner Bros. added Lawman and Bronco with Ty Hardin.

Prior to the beginning of production, Russell and Brown and producer Jules Schermermade a pact to maintain the quality of the series so that it would not be seen as “just another western.” At the start of season two, Russell and Brown were joined by Peggie Castle as Lily Merrill, the owner of the Birdcage Saloon, and a love interest for Dan. In its last season, Lawman was the lead-in on ABC for Marilyn Maxwell‘s unsuccessful seriesBus Stop, which faced competition from NBC‘s Bonanza. 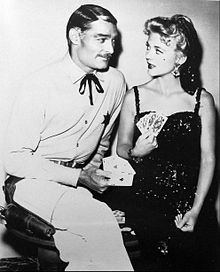 Lawman can currently be seen in re-runs of two episodes on Monday through Friday at 2 p.m. ET on the Encore Westerns Channel.

Dan Troop leaves Abilene, Kansas for the town of Laramie, Wyoming. He is offered the town marshal’s job after the previous marshal, David Lemp, is murdered. On the way into town, he meets Johnny McKay, who is placing a tombstone on Lemp’s grave. Johnny mistakes Dan for a crook, but they meet up later again at the cafe owned by Lemp’s widow, Dru, played by Bek Nelson, where Johnny works as a dishwasher. Dan puts a sign in the window of the marshal’s office that reads, “Deputy Wanted.” Johnny applies for the job, but Dan turns him down, because he believes that, at the age of nineteen, Johnny is too young. Dan later comes across Lacey Hawks, played by Edd Byrnes, in the Bluebonnet Saloon. Lacey tries to coax Dan into a gunfight, but Dan arrests him instead. Lacey promises Dan that his two brothers Flynn, played by Jack Elam, and Walt, played by Lee Van Cleef, will come after him. Johnny tells Dan that Flynn is the one who killed Marshal Lemp, and that the whole town saw him do it, but were too afraid to stand up to him. He again volunteers to help Dan take them down, but Troop refuses. Johnny tells him that he cannot take both remaining Hawks Brothers alone. Dan goes out to face them, anyway. Dan shoots Flynn, but then hears another shot from behind him. Dan sees Walt fall dead, and then turns around to see Johnny standing there with a rifle in his hand. Dan motions for Johnny to follow him back into the office and then takes down the “Deputy Wanted” sign.

During the course of the first season, Dan teaches Johnny the fundamentals of law enforcement. Frequently while Dan is pursuing outlaws, Johnny remains behind to guard the town. However, in seasons two through four, Johnny becomes more involved in the action and carries some entire episodes by himself. During the first season, the episodes maintain a serious tone. However, when Lily arrives at the start of season two, the scripts include more comedy and some romance. 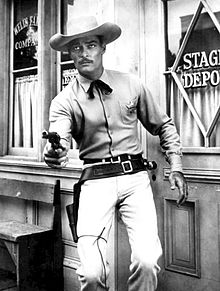 Dan Troop, played by John Russell, is the town marshal of Laramie. Russell based the character on an officer he knew in the Marines. Dan was a hardnosed, by-the-book, seasoned lawman, who is quick with a gun, and also good with his fists. Russell, who was 37 years old when he got the part, theorized that Dan would have to be older to have this much experience as a lawman. From the third episode on, Russell had white streaks added to his hair to make him appear older. In addition to being marshal, Dan was both a mentor and friend to his deputy, Johnny McKay. According to Brown on his website, Dan and Johnny’s relationship mirrored the relationship he had with Russell. While Dan was teaching Johnny how to be a lawman, Russell was teaching Brown how to be an actor. Dan also had a romantic relationship with saloon owner, Lily Merrill. Dan cared for Lily very deeply, but his job often thwarted their happiness. He had one brother, Clay Troop, played by James Drury, four years before the premiere of his The Virginian, who was killed in the season one episode, “The Gang”. It was revealed that the woman Dan loved and wanted to marry, before her death, had instead wed Clay, a gunfighter and an outlaw. Clay said that his wife “couldn’t resist trying to reform” him though she had loved Dan a little more. There were times when the townspeople would second guess Troop, but he always stuck to his guns and was determined to do the right thing. 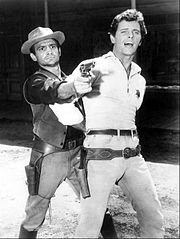 Johnny McKay, played by Peter Brown, is the deputy marshal of Laramie. Dan had been hesitant to hire Johnny as his deputy, because of his young age, but he later proved his worth. Johnny was orphaned at age ten in Kansas. His father was killed by raiders, and his mother died on a wagon train. The season one episode, “The Joker,” dealt with Johnny’s origin when an outlaw named Barney Tremain, played by Jeff York, showed up in town claiming to be Johnny’s real father. It was never revealed whether or not he was telling the truth. Johnny was more easy going, but he was also brave, extremely fast with a gun, and very loyal to Dan, who he always referred to as, “Mr. Troop.” He was close friends with Lily, but they had more of a brother-sister dynamic. In the first season, Dan many times left Johnny behind, but in the later years, he got more involved in the action as Dan started to see him as more of a partner in the fight against crime than his humble apprentice. Johnny actually quit three times. Once because if Tremain was his father, he thought that meant he had outlaw blood in him. The second time, he thought Dan was taking credit for a kill he made, but he later found out Dan was trying to protect him. The third time, Johnny had to shoot a friend of his, and lost his nerve to be a lawman. Somehow though, he always would eventually come back.

Lily Merrill, played by Peggie Castle, is the owner of the Birdcage Saloon. In addition to serving as hostess, she also sang and danced on a regular basis. Lily was formerly married to outlaw Frank Quinlaven, played by Mike Roadin the season two episode, “The Exchange.” They had a son named Tommy, played by Bryan Russell, who lived with her sister. Frank tried to use Tommy as a bargaining chip to get Lily to help him rob the Laramie bank, but Dan stopped him at the last minute. Dan and Johnny often used Lily as a sounding board whenever they had a problem. Lily was beautiful, feisty, courageous, extremely loyal, and occasionally even used a gun herself to help Dan and Johnny when no one else would. In addition to running her saloon, Lily was also elected the town fire chief, and briefly filled in as schoolmarm.