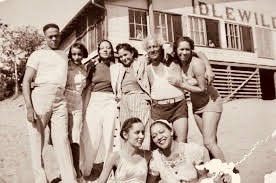 Whatever Happened to Idlewild Black Resort

“Whatever Happened to Idlewild?” is a documentary film by Coy Davis, Jr. Idlewild, Michigan, was once a thriving community steeped in African American culture and entertainment. Once known as America’s “Black Eden,” Idlewild was an active year-round community from 1912 through the mid-1960’s, and was visited by well-known entertainers and professionals from throughout the country. At its peak it was the most popular resort in the Midwest and as many as 25,000 would come to Idlewild in the height of the summer season to enjoy camping, swimming, boating, fishing, hunting, horseback riding, roller skating, and night-time entertainment. www.kpl.gov

Idlewild is small town in Yates Township, located just east of Baldwin in southeast Lake County, a rural part of northwestern lower Michigan. During the first half of the 20th century, it was one of the few resorts in the country where African-Americans were allowed to vacation and purchase property, before discrimination was outlawed in 1964 through the Civil Rights Act of 1964. The surrounding area is within Manistee National Forest. The community encompasses Lake Idlewild, and the headwaters of the Pere Marquette River extends throughout the region.

Called the “Black Eden of Michigan,” from 1912 through the mid-1960s, Idlewild was an active year-round community and was visited by well-known entertainers and professionals from throughout the country. At its peak, it was one of the most popular resorts in the Midwest and as many as 25,000 would come to Idlewild in the height of the summer season to enjoy camping, swimming, boating, fishing, hunting, horseback riding, roller skating, and night-time entertainment. When the 1964 Civil Rights Act opened up other resorts in many states to African-Americans, Idlewild’s boomtown period subsided.

Though not quite a “ghost town” as claimed in the book Ghost Towns of Michigan, Chapter 7, the population was under 1,000 in 2019, and numerous buildings were vacant. The Idlewild African American Chamber of Commerce, founded in 2000 by John O. Meeks, continues to promote existing local businesses and seeking new ones. It is also striving to attract more visitors to the area, with events and other strategies, in hopes of resuscitating the once lively town. 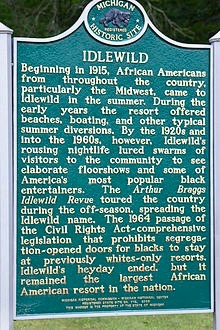 Idlewild was founded in 1912. During this period, a small yet clearly distinguishable African American middle class – largely composed of professionals and small business owners – had been established in many urban centers, including several in the American Midwest. Despite having the financial means for leisure travel, racial segregation prevented them from recreational pursuits in most resort destinations in the region.

Seeing an opportunity, four white land developers and their wives organized the Idlewild Resort Company (IRC). Erastus and Flora Branch, Adelbert and Isabelle Branch (from nearby White Cloud, Michigan), Wilbur M. and Mayme Lemon, and A.E. and Modolin Wright (of Chicago), organized IRC during the pre-World War I era. To secure land rights, Erastus Branch built a cabin, homesteaded the land for three years, and eventually obtained the title to the land through his Branch, Anderson & Tyrrell Real Estate Company, which became the central focus of the resort community.

One folk saying suggests that the community’s name refers to “idle men and wild women.” Current residents embrace this version of the story by selling playful T-shirts with this phrase at the annual Idlewilders summer festivals.

IRC organized excursions to attract middle class African American professionals from Detroit, Chicago, and other Midwestern cities, taking them on tours of the rustic community, and selling lots. Their ads in major news media offered lots at $1 down and $1 per month, and cited the hunting, fishing, boating and horseback riding opportunities. A 1919 pamphlet used by IRC to promote the community, entitled “Beautiful Idlewild”, describes it as “the hunter’s paradise” renowned “for its beautiful lakes of pure spring water” and “its myriads of game fish”. Promoters of the area also emphasized the lack of prejudice and the freedom of movement for blacks “without ostracism and hatred,” in a town where they could truly feel like “American citizens.”

One prominent personality to relocate to Idlewild was Dr. Daniel Hale Williams, who in 1893 was the first surgeon in the United States to perform open-heart surgery. Williams, Herman O. and Lela G. Wilson of Chicago, three of Williams’ associates from Chicago and Cleveland, and twenty others were among the first group of African American professionals to join IRC’s excursion. Later, tours were conducted by train from Chicago, Indiana, Detroit, Grand Rapids, St. Louis, and other cities.

IRC had acquired over 2,700 acres (11 km2) of land. The company sold a good deal of that land, and then turned the island in Idlewild Lake over to Williams and Louis B. Anderson of Chicago, and Robert Riffe and William Green of Cleveland, who collaboratively formed the Idlewild Improvement Association (IIA) and helped build the clubhouse. IIA sold property to such notables as NAACP co-founder W.E.B. Du Bois, cosmetic entrepreneur Madam C.J. Walker, Fisk University president Lemuel L. Foster, Albert B. Cleage Sr. of Detroit, Fannie Emanuel of Chicago, and novelist Charles W. Chesnutt. 3 IIA was also responsible for recruiting other middle-class professionals, such as NAACP field secretary William Pickens, H. Franklin and Virginia Bray (a missionary and his wife who together founded the first formal church in Idlewild), and the Reverend Robert L. Bradby, Sr. of Second Baptist Church of Detroit (who contributed to the development of the Idlewild Lot Owners Association). IIA encouraged this new influx of community leaders to foster racial pride, economic development, decency, and respect to Idlewild.

The annual Idlewild Chautauqua was organized by Baptist Minister Reverend Robert L. Bradby in the 1920’s and 1930’s. These week-long events added an intellectual flavor to the recreational life in the community, attracted people from across the country, and were praised by Michigan Republican Governor Fred W. Green.