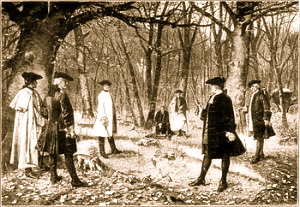 Satellite image showing the core of the New York metropolitan area. Over 10 million people live in the imaged area. Much of Hudson County is located on peninsula on left.

Hudson is located in the heart of New York metropolitan area Tri-State Region in northeastern New Jersey. It is bordered by the Hudson River and Upper New York Bay to the east; Kill van Kull to the south; Newark Bay and the Hackensack River or the Passaic River to the west; its only land border is shared Bergen County to the north and west.

History: The Lenape and New Netherland

At the time of European contact in the 17th century, Hudson County was the territory the Lenape or Lenni-Lenape, namely the bands (or family groups) known as the Hackensack, the Tappan, the Raritan, and the Manhattan. They were a seasonally migrational people who practiced small-scale agriculture (companion planting) augmented by hunting and gathering which likely, given the topography of the area, included much (shell)fishing and trapping. These groups had early and frequent contact with the by Europeans, with whom they engaged in trade. TheirAlgonquian language can still be inferred in many local place names such as Communipaw, Harsimus, Hackensack, Hoboken, Weehawken,Secaucus, and Pamrapo

Henry Hudson, for whom the county and river on which it sits is named, established a claim for the area in 1609 when anchoring his ship theHalve Maen (Half Moon) at Harsimus Cove and Weehawken Cove. The west bank of the North River (as it was called) and the cliffs, hills, and marshlands abutting and beyond it, were settled by Europeans (Dutch, Flemish, Walloon, Huguenot) from the Lowlands around the same time as New Amsterdam. In 1630, Michael Pauw received a land patent, or patroonship and purchased the land between the Hudson and Hackensack Rivers, giving it the Latin-ized form of his name, Pavonia.[9] He failed to settle the area and was forced to return his holdings to theDutch West India Company. Homesteads were established at Communipaw (1633), Harsimus (1634), Paulus Hook (1638) and Hoebuck (1643).

The British and early America

By 1675, the Treaty of Westminster finalized the transfer and the area became part of the British colony of East Jersey, in the administrative district of Bergen Township. The county’s seat was transferred to Hackensack in 1709, after Bergen County was expanded west. Small villages and farms supplied the burgeoning city of New York, across the river, notably with oysters from the vast beds in the Upper New York Bay, and fresh produce, sold at Weehawken Street, in Manhattan. During the American Revolutionary War the area was under British control which included garrsions at Bulls Ferry and the fort at Bergen Neck. Colonialist troops used the heights to observe enemy movements. The Battle of Paulus Hook, a surprise raid on a British fortification in 1779, was seen as an a victory and morale booster for revolutionary forces.

Many downtown Jersey City streets bear the name of military figures Mercer, Greene, Wayne, and Varick among them. Weehawken became notorious for duels, including the nation’s most famous between Alexander Hamilton and Aaron Burr in 1804.  Border conflicts for control of the waterfront with New York (which claimed jurisdiction to the high water line and the granting of ferry concessions) restricted development though some urbanization took place in at Paulus Hook and Hoboken, which became a vacation spot for well-off New Yorkers. The Morris Canal, early steam railroads, and the development of the harbor stimulated further growth. In September 1840, Hudson County was created by separation from Bergen County and annexation of some Essex County lands, namely New Barbadoes Neck. During the 19th century, Hudson played an integral role in the Underground Railroad, with four routes converging in Jersey City.

David L. Holden, Abolitionist & Agent for the Underground Railroad. At 79 Clifton Place, Jersey City, New Jersey. He would hide slaves out up in the upper section of the house (c. Lawrence E. Walker Foundation Collection)

Abolitionism did find its voice in Jersey City. Perhaps the best-known abolitionist was David L. Holden. His home at 79 Clifton Place, the only house on the block during the 1850s, was known as a “safe house.” It was used to hide the fugitive slaves in the basement, which had a fireplace for the temporary occupants. As an amateur astronomer, Holden had an observatory on the roof of the house from which he received signals for the movement of the slaves he sequestered in his home. According to Glenn Cunningham, Mayor of Jersey City and author and narrator of the TV documentary Hidden Footprints, the Holden House is the only site in Jersey City that remains from Underground Railroad. He further notes that the property behind the Medical Center, near Cornelison Avenue, was a pine and cedar forest that offered protection to the slaves although well known to bounty hunters (Cunningham, VHS copy of Jersey City Cable TV Documentary, 1991).

During the latter half of the 19th and early part of the 20th centuries, Hudson experienced intense industrial, commercial and residential growth.  Construction, first of ports, and later railroad terminals, in Jersey City, Bayonne, Hoboken, and Weehawken (which significantly altered the shoreline with landfill) fueled much of the development. European immigration, notably German-language speakers and Irish (many fleeing famine) initiated a population boom that would last for several decades.

Neighborhoods grew as farms, estates, and other holdings were sub-divided for housing, civic and religious architecture. Streets (some with trolley lines) were laid out. Stevens Institute of Technologyand Saint Peter’s College were established.

Central Railroad of New Jersey‘s Communipaw Terminal, across a small strait from Ellis Island and The Statue of Liberty, played a crucial role in the massive immigration of the period, with many newly-arrived departing the station to embark on their lives in America. Many, though, decided to stay, taking jobs on the docks, the railroads, the factories, the refineries, and in the sweatshops and skyscrapers of Manhattan. Many manufacturers, whose names read as a “who’s who” in American industry established a presence, including Colgate, Dixon Ticonderoga, Maxwell House, Standard Oil, and Bethlehem Steel.

The Hoboken Historical Museum, founded in 1986, is located in Hoboken, New Jersey and presents rotating exhibitions and activities related to the history, diverse culture, architecture and historic landmarks of the city. In 2001, the museum moved to 1301 Hudson Street. into the last standing building of former Bethlehem Steel Hoboken Shipyard  Through its Hoboken Oral History Project, the museum and the Friends of the Hoboken Public Library have been capturing the recollections of longtime residents, which include stories about mom-and-pop shops, the city’s many movie palaces, jazz clubs, vaudeville performances, political campaigns, ethnic traditions, and factory jobs.

Recent exhibits have included a focus on Hoboken’s relationship with the Hudson River and its role as a sweets producer. Other exhibits included shipping history, an anniversary of the movie “On the Waterfront,” the city’s contributions to the world of music, and its struggle and revival through the 1970s. Our upper gallery space features six local artists’ work per year.

We are open six days a week in a 2,000-square-foot space in one of the oldest buildings on Hoboken’s waterfront, the former Bethlehem Steel machine shop, now known as the Shipyard.

We also publish books and walking-tour maps, as well as a series of oral history chapbooks documenting the diverse communities of Hoboken’s recent past. Each exhibit offers a tailored curriculum for local schools and groups of youngsters.