You are here: Home / Education / Politics / US Politics / History You Didn’t Know About: Testimony of Paul Robeson before the House Committee on Un-American Activities

History You Didn’t Know About: Testimony of Paul Robeson before the House Committee on Un-American Activities 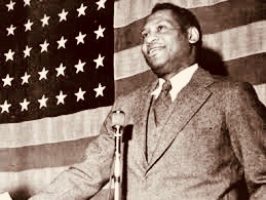 “You Are the Un-Americans, and You Ought to be Ashamed of Yourselves”: Paul Robeson Appears Before HUAC

Many African-American witnesses subpoenaed to testify at the House Committee on Un-American Activities (HUAC) hearings in the 1950s were asked to denounce Paul Robeson (1888–1976) in order to obtain future employment. Robeson, an All-American football player and recipient of a Phi Beta Kappa key at Rutgers, received a law degree at Columbia. He became an internationally acclaimed concert performer and actor as well as a persuasive political speaker. In 1949, Robeson was the subject of controversy after newspapers reports of public statements that African Americans would not fight in “an imperialist war.”

In 1950, his passport was revoked. Several years later, Robeson refused to sign an affidavit stating that he was not a Communist and initiated an unsuccessful lawsuit. In the following testimony to a HUAC hearing, ostensibly convened to gain information regarding his passport suit, Robeson refused to answer questions concerning his political activities and lectured bigoted Committee members Gordon H. Scherer and Chairman Francis E.Walter about African-American history and civil rights. In 1958, the Supreme Court ruled that a citizen’s right to travel could not be taken away without due process and Robeson’ passport was returned. To read the full Testimony go to the link below: