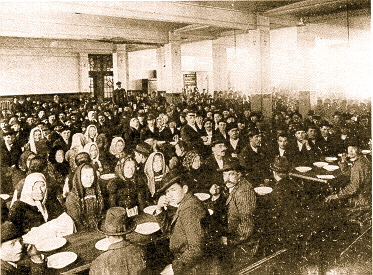 A documentary on immigration to the United States in the late 19th century and early 20th century. This is part 1. 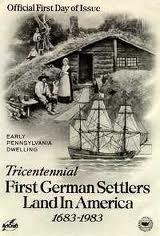 German Americans (German: Deutschamerikaner) are citizens of the United States who were either born in Germany or are of German ancestry. They comprise about 50 million people, making them the largest ancestry groupahead of Irish Americans, African Americans and English Americans.   They comprise about 1/3 of the German diaspora all over the world.   However English-Americans are seriously under-counted due to their self-reporting as ‘Americans’ in that they have been in the United States for so long they consider themselves indigenous.

None of the German states had New World colonies. Not until the 1670’s did the first significant groups of German immigrants arrive in the British colonies, settling primarily in New York and Pennsylvania. Immigration continued in very large numbers during the 19th century, with some eight million arrivals from Germany. They were pulled by the attractions of land and religious freedom, and pushed out of Europe by shortages of land and religious or political oppression.   Many arrived seeking religious or political freedom, others for economic opportunities greater than those in Europe, and others simply for the chance to start fresh in the New World. The arrivals before 1850 were mostly farmers who sought out the most productive land, where their intensive farming techniques would pay off. After 1840, many came to cities, where “Germania”—German-speaking districts—soon emerged.

German Americans established the first kindergartens in the United States, introduced the Christmas tree tradition, and originated popular American foods such as hot dogs and hamburgers.

German American celebrations are held throughout the country, one of the most well-known being the German-American Steuben Parade in New York City, held every third Saturday in September. There are also major annual events in Chicago, Cincinnati, Milwaukee, Pittsburgh, St. Louis and other cities. Like many other immigrants that came to the United States, an overwhelming number of people of German or partial German descent have essentially become Americanized.

The first English settlers arrived at Jamestown, Virginia in 1607, and were accompanied by the first German American, Dr. Johannes Fleischer. He was followed in 1608 by five glassmakers and three carpenters or house builders.   The first permanent German settlement in what became the United States was Germantown, Pennsylvania, founded near Philadelphia on October 6, 1683. 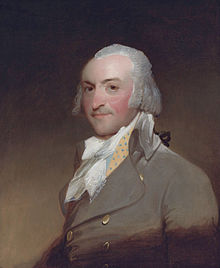 John Jacob Astor, in an oil painting by Gilbert Stuart, 1794, was the first of the Astor family dynasty and the first millionaire in the United States, making his fortune in the fur trade and New York City real estate.

Large numbers of Germans migrated from the 1680s to 1760s, with Pennsylvania the favored destination. They migrated to America for a variety of reasons; Push factors involved worsening opportunities for farm ownership in central Europe, persecution of some religious groups, and military conscription; pull factors were better economic conditions, especially the opportunity to own land, and religious freedom. Often immigrants paid for their passage by selling their labor for a period of years as indentured servants.

Large sections of Pennsylvania and upstate New York attracted Germans. Most were Lutheran or German Reformed; many belonged to small religious sects such as the Moravians and Mennonites. German Catholics did not arrive in number until after the war of 1812.

In 1709, Protestant Germans from the Pfalz or Palatine region of Germany escaped conditions of hardship, traveling first to Rotterdam and then to London. Anne, Queen of Great Britain, helped them get to her colonies in America. The trip was long and difficult to survive because of the poor quality of food and water aboard ships and the infectious disease typhus. Many immigrants, particularly children, died before reaching America in June 1710.

The Palatine immigration of about 2100 people who survived was the largest single immigration to America in the colonial period. Most were first settled along the Hudson River in work camps, to pay off their passage. By 1711, seven villages had been established in New York on the Robert Livingston manor. In 1723 Germans became the first Europeans allowed to buy land in the Mohawk Valley west of Little Falls. One hundred homesteads were allocated in the Burnetsfield Patent. By 1750, the Germans occupied a strip some 12 miles (19 km) long along both sides of the Mohawk River. The soil was excellent; some 500 houses were built, mostly of stone, and the region prospered in spite of Indian raids. Herkimer was the best-known of the German settlements in a region long known as the “German Flats.”

The most famous of the early German Palatine immigrants was editor John Peter Zenger, who led the fight in colonial New York City for freedom of the press in America. A later immigrant, John Jacob Astor, who came from Baden after the Revolutionary War, became the richest man in America from his fur trading and real estate investments in New York City. 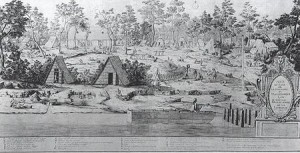 View of the camp of John Law at Biloxi, December 1720

The Mississippi Company settled thousands of German pioneers in French Louisiana during 1721. It encouraged Germans, particularly Germans of the Alsatian region who had recently fallen under French rule, and the Swiss to immigrate. Alsace was sold to France within the greater context of the Thirty Years’ War (1618–1648).

The Jesuit Charlevoix went from Canada to Louisiana. His letter said “these 9,000 Germans, who were raised in the Palatinate (Alsace part of France) were in Arkansas. The Germans left Arkansas en masse. They went to New Orleans and demanded passage to Europe. The Mississippi Company gave the Germans rich lands on the right bank of the Mississippi River about 25 miles (40 km) above New Orleans. The area is now known as ‘the German Coast’.”

A thriving population of Germans lived upriver from New Orleans, Louisiana, known as the German Coast. They were attracted to the area through pamphlets such as J. Hanno Deiler’s “Louisiana: A Home for German Settlers.”

Two waves of German colonists in 1714 and 1717 founded a large colony in Virginia called Germanna, located near modern-day Culpeper, Virginia.

In North Carolina, German Moravians living around Bethlehem, Pennsylvania purchased nearly 100,000 acres (400 km2) from Lord Granville (one of the British Lords Proprietor) in the Piedmont of North Carolina in 1753. They established German settlements on that tract, especially in the area around what is now Winston-Salem. They also founded the transitional settlement of Bethabara, North Carolina, translated as House of Passage, the first planned Moravian community in North Carolina, in 1759. Soon after, the German Moravians founded the town of Salem in 1766 (now a historical section in the center of Winston-Salem) and Salem College (an early female college) in 1772.

German immigrants also settled in other areas of the American South, including around the Dutch (Deutsch) Fork area of South Carolina, and Texas, especially in the Austin area. 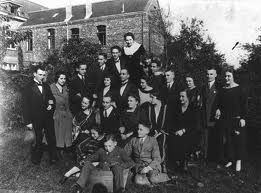 German Jews immigrated to the American South throughout the 19th century until the early 20th century. They formed small German-Jewish communities in many parts of the South, especially in cities and towns, where they most often worked as local and regional merchants, cattle/livestock dealers, agricultural commodity traders, bankers, and business owners. Henry Lehman, who founded Lehman Brothers in Alabama with his brother, is a particularly prominent example of such a German-Jewish immigrant. German Jews settled in cities such as Charleston, South Carolina, where they founded the first Reform synagogue (Congregation Kahal Kadosh Beth Elohim) in the country. German Jews also settled in other Southern cities and towns, where they built German-Jewish synagogues.

Between 1742 and 1753, roughly 1,000 Germans settled in Broad Bay, Massachusetts (now Waldoboro, Maine). Many of the colonists fled to Boston, Nova Scotia, and North Carolina after their houses were burned and their neighbors killed or carried into captivity by Native Americans. The Germans who remained found it difficult to survive on farming, and eventually turned to the shipping and fishing industries.

The tide of German immigration to Pennsylvania swelled between 1725 and 1775, with immigrants arriving as redemptioners or indentured servants. By 1775, Germans constituted about one-third of the population of the state. German farmers were renowned for their highly productive animal husbandry and agricultural practices. Politically, they were generally inactive until 1740, when they joined a Quaker-led coalition that took control of the legislature, which later supported the American Revolution. Despite this, many of the German settlers were loyalists during the Revolution, possibly because they feared their royal land grants would be taken away by a new republican government, or because of loyalty to a British German monarchy who had provided the opportunity to live in a liberal society.    The Germans, comprising Lutherans, Reformed, Mennonites, Amish, and other sects, developed a rich religious life with a strong musical culture. Collectively, they came to be known as the Pennsylvania Dutch (from Deutsch).   Etymologically, the word Dutch originates from the Old High German word “diutisc” (from “diot” “people”), referring to the Germanic “language of the people” as opposed to Latin, the language of the learned (see also theodiscus). Only later did the word come to refer to the people who spoke the language.   Other Germanic language variants for “deutsch/deitsch/dutch” are: Dutch “Duits,” Yiddish “daytsh,” Danish “tysk,” Norwegian “tysk,” and Swedish “tyska“). There were few German Catholics in Pennsylvania before the 1810s.

The Studebaker brothers, forefathers of the wagon and automobile makers, arrived in Pennsylvania in 1736 from the famous blade town of Solingen. With their skills, they made wagons that carried the frontiersmen westward; their cannons provided the Union Army with artillery in the American Civil War, and their automobile company became one of the largest in America, although never eclipsing the “Big Three”, and was a factor in the war effort and in the industrial foundations of the Army.

When the American Revolutionary War broke out, Britain made arrangements with German princes to hire some 30,000 “Hessian” soldiers to fight against the American army. The largest group came from the country of Hesse, and the soldiers are often referred to as Hessians. Many became prisoners on American farms, some of whom permanently settled in America.

From names in the 1790 U.S. census, historians estimate Germans constituted nearly 9% of the white population in the United States. 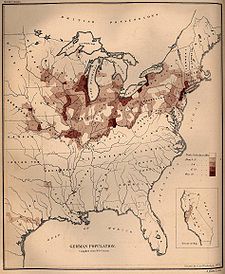 The largest flow of German immigration to America occurred between 1820 and World War I, during which time nearly six million Germans immigrated to the United States. From 1840 to 1880, they were the largest group of immigrants. Following the Revolutions of 1848 in the German states, a wave of political refugees fled to America, who became known as Forty-Eighters. They included professionals, journalists, and politicians. Prominent Forty-Eighters included Carl Schurz and Henry Villard. 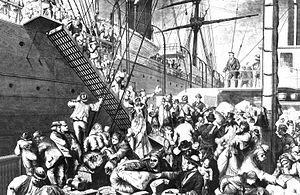 “From the Old to the New World” shows German emigrants boarding a steamer in Hamburg, to New York.Harper’s Weekly, (New York) November 7, 1874

The cities of Milwaukee,Cincinnati, St. Louis, Chicago, New York, and Baltimore were favored destinations of German immigrants. Also, the Northern Kentucky area was a favored destination. By 1900, the populations of the cities of Cleveland, Milwaukee, Hoboken, and Cincinnati were all more than 40% German American.Dubuque and Davenport, Iowa had even larger proportions, as did Omaha, Nebraska, where the proportion of German Americans was 57% in 1910. In many other Northern cities, such as Fort Wayne, Indiana, German Americans were at least 30% of the population.   Many concentrations acquired distinctive names suggesting their heritage, such as the “Over-the-Rhine” district in Cincinnati and “German Village” in Columbus, Ohio.

A favorite destination was Milwaukee, known as “the German Athens“. Radical Germans trained in politics in the old country dominated the city’s Socialists. Skilled workers dominated many crafts, while entrepreneurs created the brewing industry; the most famous brands included Pabst, Schlitz, Miller, and Blatz.

Whereas half of German immigrants settled in cities, the other half established farms in the Midwest. From Ohio to the Plains states, a heavy presence persists in rural areas into the 21st century.   Few Germans settled in the Deep South, apart from some in New Orleans.