You are here: Home / Education / Women Who Made History / Elizabeth Cady Stanton and Susan B. Anthony 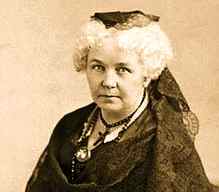 Susan B. Anthony and Elizabeth Cady Stanton: The Fight for Women’s Rights

Kate Wilhelm, Emilee Bennett, and Jenna Fellows competed in the National History Day Contest in Washington DC with this documentary. They created and presented it at the Thomas Edison Charter School North contest, the Northern Utah Regional contest, and finally won second place at the Utah State Contest with Jeff Low as their teacher. 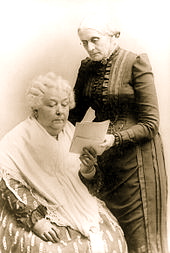 The women’s suffrage movement began with the 1848 Seneca Falls Convention; many of the activists became politically aware during the abolitionist movement. The movement reorganized after the Civil War, gaining experienced campaigners, many of who had worked for prohibition in the Women’s Christian Temperance Union. By the end of the 19th century a few western states had granted women full voting rights, though women had made significant legal victories, gaining rights in areas such as property and child custody. 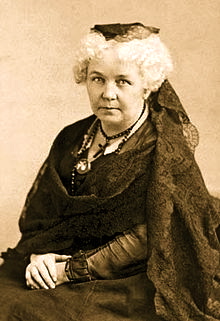 In 1866, Elizabeth Cady Stanton and Susan B. Anthony formed the American Equal Rights Association, an organization for white and black women and men dedicated to the goal of suffrage for all. In 1868 the Fourteenth Amendment was passed, this was the first Amendment to ever specify the voting population as “male.” In 1869 the women’s rights movement split into two factions as a result of disagreements over the Fourteenth and soon-to-be-passed Fifteenth Amendments, with the two factions not reuniting until 1890. Elizabeth Cady Stanton and Susan B. Anthony formed the more radical, New York-based National Woman Suffrage Association (NWSA). Lucy Stone, Henry Blackwell, and Julia Ward Howe organized the more conservative American Woman Suffrage Association (AWSA), which was centered in Boston. In 1870 the Fifteenth Amendment enfranchised black men. NWSA refused to work for its ratification, arguing, instead, that it be “scrapped” in favor of a Sixteenth Amendment providing universal suffrage. Frederick Douglass broke with Stanton and Anthony over NWSA’s position.

In 1869 Wyoming became the first territory or state in America to grant women suffrage. In 1870 Louisa Ann Swain became the first woman in the United States to vote in a general election. She cast her ballot on September 6, 1870, in Laramie, Wyoming.

From 1870 to 1875 several women, including Virginia Louisa Minor, Victoria Woodhull, and Myra Bradwell, attempted to use the Fourteenth Amendment in the courts to secure the vote (Minor and Woodhull) or the right to practice law (Bradwell), but they were all unsuccessful. In 1872 Susan B. Anthony was arrested and brought to trial in Rochester, New York, for attempting to vote for Ulysses S. Grant in the presidential election; she was convicted and fined $100 and the costs of her prosecution but refused to pay. At the same time, Sojourner Truth appeared at a polling booth in Battle Creek, Michigan, demanding a ballot; she was turned away. Also in 1872, Victoria Woodhull became the first woman to run for President, although she could not vote and only received a few votes, losing to Ulysses S. Grant. She was nominated to run by the Equal Rights Party, and advocated the 8-hour work day, graduated income tax, social welfare programs, and profit sharing, among other positions. In 1874 The Woman’s Christian Temperance Union (WCTU) was founded by Annie Wittenmyer to work for the prohibition of alcohol; with Frances Willard at its head (starting in 1876), the WCTU also became an important force in the fight for women’s suffrage. In 1878 a woman suffrage amendment was first introduced in the United States Congress, but it did not pass.