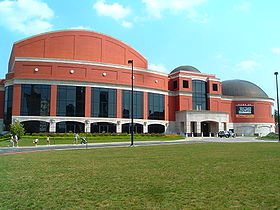 Clay Center for the Arts and Sciences of West Virginia

The Clay Center opened in 2003 and is an arts and science museum, which houses an 1,894-seat performance hall located in Charleston, West Virginia. The Clay Center also offers a 175-seat large-format film theater for educational films and planetarium shows. Clay Center exhibits and performances are also available throughout West Virginia as part our a community outreach program. A great venue, great programs and a great time. 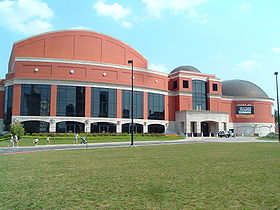 The Clay Center for the Arts and Sciences – West Virginia in Charleston, West Virginia, USA is a 240,000-square-foot (22,000 m2) facility dedicated to promoting arts, visual arts, and the sciences. All three being housed under one roof makes the Clay Center one of the few of its kind in the United States.

The Clay Center opened on July 12, 2003, and is one of the most ambitious economic, cultural and educational undertakings in West Virginia history. It is currently the home to Avampato Discovery Museum and the West Virginia Symphony.

The Avampato Discovery Museum features two floors of interactive science exhibits and an art gallery. Science gallery themes include creativity and engineering; sound, light and color; energy and magnetism; earth science; health and wellness; and a special area for children age five and under. The Museum’s art gallery features selections from its permanent collections and traveling exhibitions.

The ElectricSky Theater is part of the Museum and presents planetarium shows and large format films on its giant domed screen. Admission to the Theater is in addition to the regular Museum ticket.

The Clay Center is named for West Virginia philanthropists Buckner and Lyell Clay of the Clay Foundation. Construction began in 1999. 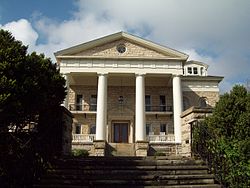 Sunrise, also known as MacCorkle Mansion, is a historic home located at Charleston, West Virginia. It was built in 1905 by West Virginia’s ninth governor, William A. MacCorkle (1857-1930). It is a long, three-story stone mansion. Its gabled roof is dotted with dormers and chimneys and surmounts an intricate, but wide, cornice which gives the illusion that the house is smaller than it actually is. The Georgian structure rests on a bluff overlooking the Kanawha River, and from the northern portico one can see nearly the entire city of Charleston. The north side features four magnificent Doric, or neo-classic, columns which support the cornice and ashlar-finished pediment. In 1961 Sunrise Foundation, Inc., was formed for the purpose of purchasing the mansion and grounds.

It was listed on the National Register of Historic Places in 1974.

The mansion was the former home of the Sunrise Museum, a science and art museum that became the Avampato Discovery Museum when it moved into the Clay Center for the Arts and Sciences – West Virginia when in opened in 2003.  Currently the house is privately owned and is not open to the public.