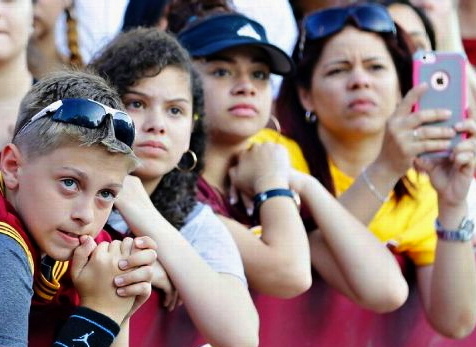 The Cleveland Cavaliers took home the 2016 NBA Championship behind a triple-double from LeBron James and a cold-blooded dagger 3-pointer by Kyrie Irving in the final minute. NESN.com’s Marc DiBenedetto brings you the details from Game 7 of the 2016 NBA Finals and the first championship in Cleveland since the 1964 Browns. 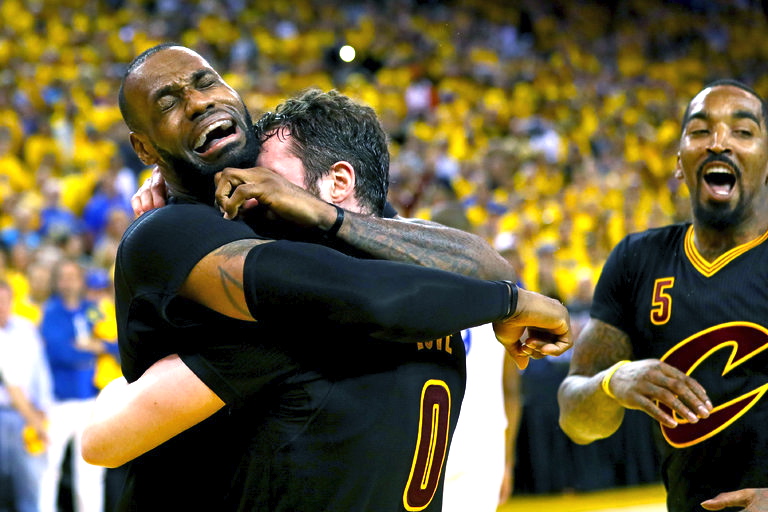 LeBron James, Kevin Love and J.R. Smith of the Cavaliers after their victory over the Golden State Warriors in Game 7. Credit Ezra Shaw/Getty Images

OAKLAND, Calif. — Vilified when he left and celebrated when he returned, LeBron James had spent the past two seasons lugging his city’s championship dreams like a bag of rocks. The weight had only grown more cumbersome — the weight of history, of disappointment, of missed opportunities.

James could feel it all on his sturdy shoulders.

On Sunday night, before a dazed and defeated crowd at Oracle Arena, James delivered on the grandest stage of his superhuman career, leading the Cleveland Cavaliers to their first championship in franchise history with a 93-89 victory over the Golden State Warriors in Game 7 of the N.B.A. finals.

James collected 27 points, 11 rebounds, 11 assists to punctuate one of the most remarkable individual performances in finals history. James, who was named the finals’ most valuable player, got ample help from teammate Kyrie Irving, whose 3-pointer with 53 seconds remaining gave the Cavaliers the lead — and an improbable title.

Improbable because the Cavaliers became the first team to rally from a 3-1 series deficit to win a championship. Improbable because the Warriors, after setting an N.B.A. record with 73 victories in the regular season, had spent months making their case as the most dominant team since Dr. James Naismith first affixed a peach basket to a wall.

And improbable, above all, because of Cleveland’s ragtag history as an also-ran. Not since 1964, when the Browns won the N.F.L. championship, had the city claimed a major sports title.

James, who grew up in nearby Akron, has forever changed all of that. He stuffed the series with thunderous dunks and fadeaway jumpers, blocked shots and glowering expressions, towing his teammates along in his ferocious wake. James won two championships with the Miami Heat, but this was his first with the Cavaliers — and his first for Ohio.

Not even the Warriors, who were pursuing back-to-back championships in a repeat of last year’s finals matchup, could slow his march.

Irving finished with 26 points for the Cavaliers, who survived three elimination games. In Cleveland, fans jammed the streets around Quicken Loans Arena for a watch party from afar. 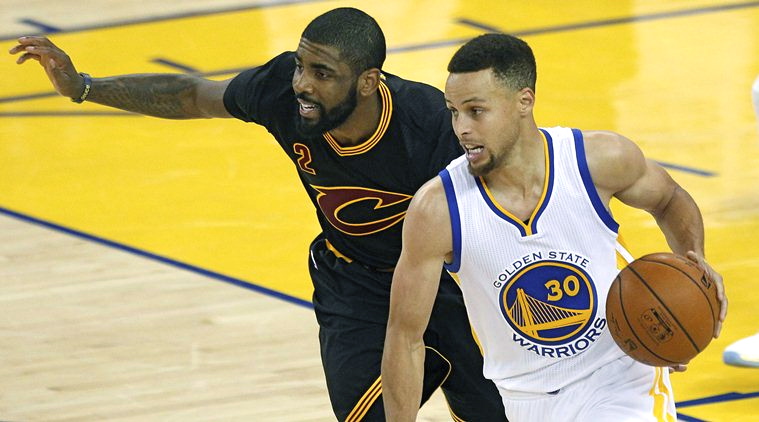 Draymond Green had 32 points, 15 rebounds and 9 assists for the Warriors, and Stephen Curry scored 17 points but shot just 6 of 19 from the field. In the final minute, Curry missed a 3-pointer that would have tied the game. With 10.6 seconds left, James made 1 of 2 free throws to seal the win.

The Cavaliers formed a raucous mob at the buzzer — joy and disbelief, all at once.

On the postgame dais, James clutched the championship trophy to his chest. He choked back tears.

“Everybody counted us out,” James told ESPN’s Doris Burke. “That’s when we strive the most — when everybody’s counting us out.”

Get the big sports news, highlights and analysis from Times journalists, with distinctive takes on games and some behind-the-scenes surprises, delivered to your inbox every week.

From the moment the Warriors set about stalking the 1995-96 Chicago Bulls for the best regular-season record in league history, they cautioned that it would mean almost nothing without a championship, too. The Warriors were greedy — they wanted all the records, all the wins and another trophy at the end.

“We’re stunned,” Coach Steve Kerr said. “We thought we were going to win.”

The Warriors found their postseason journey to be more jagged than they imagined. The tenor of the team’s chase was jarred off course in the first game of the playoffs, when Curry injured his right ankle. Three games later, he slipped on a wet spot against the Houston Rockets, spraining his right knee.