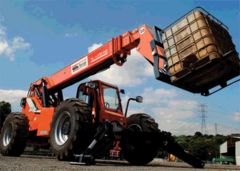 WORLD CUP 2014 – OLYMPICS 2016 – Brazil hosting both events, but the works have only just started.

Mills businesses are currently working at 10 stadiums that will be used for the two events as well as related transport infrastructure. The company said 17% of revenues at its Heavy Construction division were related to Olympic/World Cup projects.

Mills Rental, the division that rents aerial platforms, reported record first quarter revenues of R$56.5 million (US$28.8 million), up 67.4% compared to the same quarter in 2011. The EBITDA margin on sales for the division was 61.8%, the highest for the division over the last three years.

The division continues to benefit from enormous investment in house building, infrastructure and power generation in the country as well as spending related to the country’s hosting of the 2014 World Cup and 2016 Olympics, investment on which Mills said was now “intensifying”. The company is also involved in Brazil’s PAC programme to build new housing in the country.

Capital expenditure during the quarter reached R$58.4 million (US$29.9 million), equivalent to almost 46% of the full 2012 CapEx budget. Approximately 45% of this – around US$13.5 million – was invested by Mills Rental.