You are here: Home / Events / World Events / Boston Bombs Were Loaded to Maim

Boston Bombs Were Loaded to Maim 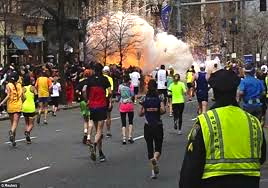 Explosions at the Boston Marathon

Watch the aftermath of the explosions that rocked Boylston Street during the Boston Marathon. Video by Steve Silva 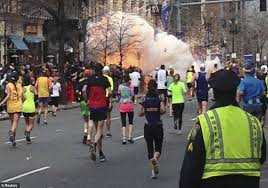 Boston Bombs Were Loaded to Maim

Boston — The explosives that killed three people and injured more than 170 during the Boston Marathon on Monday were most likely rudimentary devices made from ordinary kitchen pressure cookers, except they were rigged to shoot sharp bits of shrapnel into anyone within reach of their blast and maim them severely, law enforcement officials said Tuesday.

The pressure cookers were filled with nails, ball bearings and black powder, and the devices were triggered by “kitchen-type” egg timers, one official said.

The resulting explosions sent metal tearing through skin and muscle, destroying the lower limbs of some victims who had only shreds of tissue holding parts of their legs together when they arrived at the emergency room of Massachusetts General Hospital, doctors there said. 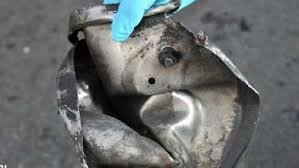 Law enforcement officials said the devices were probably hidden inside dark nylon duffel bags or backpacks and left on the street or sidewalk near the finish line. Forensic experts said that the design and components of the homemade devices were generic but that the marking “6L,” indicating a six-liter container, could help identify a brand and manufacturer and possibly lead to information on the buyer.

New details about the explosives emerged as President Obama announced that the F.B.I. was investigating the attack as “an act of terrorism,” and made plans to come to Boston on Thursday for an interfaith service at the Cathedral of the Holy Cross.

But officials said they still had no suspects in custody and did not give the impression that they were close to making an arrest as they repeatedly noted that the investigation was in its infancy.

“The range of suspects and motives remains wide open,” Richard DesLauriers, the special agent in charge of the F.B.I.’s Boston office, said at a televised briefing on Tuesday afternoon. And, he added, no one has claimed responsibility.

At this stage of an inquiry, officials said it was not unusual for there to be no suspects. But with the paucity of leads, Mr. DesLauriers and others pleaded with members of the public to submit any photographs or video they may have taken at the blast site to help in the investigation. At the briefing, Mr. DesLauriers said that someone somewhere almost certainly heard a mention of the marathon or the date of April 15. 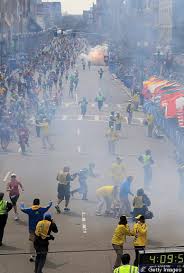 “Someone knows who did this,” he said. “Cooperation from the community will play a crucial role.”

Officials said that as of Tuesday afternoon, they had received more than 2,000 tips from around the world. As marathoners left through Logan Airport on Tuesday, security personnel reminded them of the importance of sharing their pictures with the F.B.I.

Counterterrorism specialists said the authorities would aim to match the faces of any possible suspects, using facial recognition software, against an array of databases for visas, passports and drivers’ licenses. “It’s our intention to go through every frame of every video that we have to determine exactly who was in the area,” Edward Davis, the Boston police commissioner, said at the news briefing. “This was probably one of the most well-photographed areas in the country yesterday.”

Boston was deserted on Tuesday morning, not only because many of the runners and spectators were leaving town, but also because yellow police tape and metal barriers still marked off a nearly mile-long area encompassing the two explosion sites, one that the police described as the most complex crime scene they had ever encountered.

At the morning commuter rush, the city’s subway system was uncharacteristically quiet, watched over by the police and SWAT teams. Stores on Newbury Street, Boston’s busy retail thoroughfare, were closed, and tables on the patio at Stephanie’s, a restaurant there, were still covered in dishes left there on Monday.