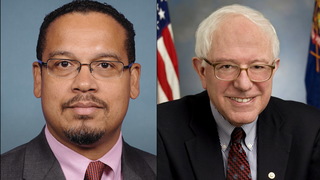 We feature a surprise address by Senator Bernie Sanders outside the White House on Tuesday during a global day of action against the Dakota Access pipeline that included demonstrations in over 300 cities. “Today we are saying it is time for a new approach to the Native American people, not to run a pipeline through their land,” Sanders said, demanding that their sovereign rights be honored. He also spoke about the need for politicians to protect access to clean water, recognize that climate change is real and support an aggressive shift away from fossil fuels to sustainable energy sources.

AMY GOODMAN: We’re broadcasting from Marrakech, Morocco, the site of the U.N. climate summit, or COP 22, the Conference of the Parties. Thousands of protesters gathered across the United States and the world Tuesday for a global day of action against the Dakota Access pipeline. Protests were held in over 300 cities. In New York, dozens were arrested when protesters staged a sit-in outside the U.S. Army Corps of Engineers office. Another 25 people were arrested in North Dakota. Protesters also rallied outside the White House, where Senator Bernie Sanders made a surprise appearance and addressed the protesters.

And the second issue that we are here for this night is to understand that in midst—in the midst of a major water crisis and a growing crisis in our country and around the world, we are not going to allow a pipeline to endanger the clean water that millions of people depend upon.
And the third issue—the third issue is that everybody here understands that not only is climate change real, not only is it caused by human behavior, but it is already causing devastating problems in our country and all over this world. It is totally insane, and future generations will look back on us now and say, “What in God’s name were you doing?”

Our job now is to break our dependency on fossil fuel. Our job now is to move aggressively to energy efficiency and sustainable energies like wind and solar and geothermal. The idea that at this moment in history, when the scientific community is crystal clear that we need to transform our energy system, that at this moment we have the fossil fuel industry pushing for more pipelines, for more dependency on fossil fuel, is totally insane.

So we say to President Obama, in any and every way you can, stop the pipeline. Tell the Army Corps of Engineers that we know—we don’t need any more studies to know—that in the midst of a great crisis, a global crisis with regard to climate change, every environmental study will tell you: Do not build this pipeline. And if there are other approaches, such as declaring Standing Rock a federal monument, let’s do that.

I don’t have to tell anybody here that we have a new president coming in who wants—who wants this country to become more dependent on fossil fuel, who is endangering—endangering the lives of our children and our grandchildren and future generations. What we have got to tell Mr. Trump and everybody else: We are not going silently into the night. The stakes are too high for the future of this planet. We are going to be smart. We’re going to educate. We’re going to organize. We’re going to bring tens of millions of people, moms and dads and their kids, together, together, to tell the fossil fuel industry that their short-term profits are not more important than the future of our planet. To read more go to the link below.