You are here: Home / Education / Women Who Made History / Becky Hammon 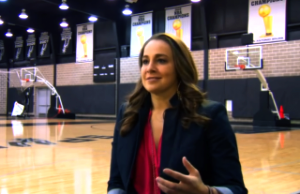 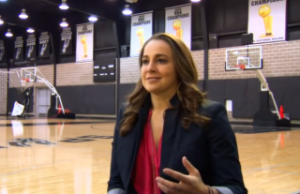 ESPN reminds us that there has already been a female assistant coach in the NBA — once, 12 years ago.

“Hammon is not the first woman hired to be an NBA assistant. Lisa Boyer, now associate head women’s basketball coach at South Carolina, served on John Lucas‘ staff in Cleveland in the 2001-02 season.”

Jeff Zillgitt of USA Today looked into it, however, and it doesn’t seem as though Boyer’s role was all that significant — or even one that was in an official capacity with the Cavaliers.

“Just got off the phone with John Lucas. Lisa Boyer didn’t travel with the team and he said she was paid by WNBA’s Cleveland Rockers.”

The San Antonio Spurs have been the NBA’s model franchise for success over the past 17 seasons, and their latest move is a groundbreaking one that other teams may follow for years to come.

Becky Hammon, a six-time WNBA All-Star who is finishing up a 16-year career as a player, has been named by the Spurs as the NBA’s second female assistant coach.

From the official release: Hammon, who is currently in her 16th WNBA season, announced on July 23 that she would retire as a player at the conclusion of the 2014 season. Named one of the WNBA’s Top 15 Players of All-Time in July of 2011, Hammon ranks seventh in WNBA history in points (with 5,809), fourth in assists (1,687) and sixth in games (445).

“I very much look forward to the addition of Becky Hammon to our staff,” said Spurs Head Coach Gregg Popovich. “Having observed her working with our team this past season, I’m confident her basketball IQ, work ethic and interpersonal skills will be a great benefit to the Spurs.”

Hammon may have faced challenges trying to coach immature players in a different organization that isn’t as well-run as the one in San Antonio. But the environment of professionalism and hard work that Popovich has created there make this the perfect setting for her to get her start.

For more on Hammon and her coaching beginnings with Popovich and the Spurs, check out the link above.