You are here: Home / Family Tree / Who Do You Think You Are / Barbara Walters and Geoffrey Canada

Henry Louis Gates Jr continues this new ten-part series in which prominent Americans trace their ancestry, often with surprising results. This episode unearths missing links in the family histories of journalist and broadcaster Barbara Walters and educational reformer and social activist Geoffrey Canada. Barbara comes from a family of Jewish immigrants who came to America from Poland in 1909 at a time when many Jews were fleeing from the anti-Semitism that was sweeping across Europe. It transpires that the original family name was Waremwasser, which was later Anglicised to Warmwater, and it is this name that appears on her father’s birth certificate. It was changed to Walters in 1910. Geoffrey Canada runs the Harlem Children’s Zone, an organisation dedicated to improving the lives of disadvantaged children in New York’s poorest areas. His great grandfather Peter Canada was listed as Peter Kennedy, which seems to have been adapted from Cannaday at some point. His great great grandfather Thomas took the name from his owners, the Cannaday family of Virginia. He could have even been Charles Cannaday’s son — certainly, DNA research proves that he is descended from a white man. 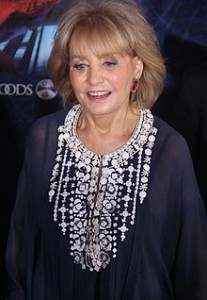 Barbara Walters has arguably interviewed more statesmen and stars than any other journalist in history. She is so well known that her name and a brief biography is listed in the American Heritage Dictionary.

In September 2004, after 25 years as co-host and chief correspondent of ABC News’ “20/20,” Ms. Walters left the show to begin a new phase in her career at the network. She remains an active member of the news division and network, substantially increasing the number of primetime ABC News specials, in addition to her “Barbara Walters Specials.” Ms. Walters joined ABC News in 1976 as the first woman to co-host the network news.

In her final season, Barbara Walters’ “20/20” newsmaker exclusives included the coveted first interview with Senator Hillary Rodham Clinton regarding her highly-anticipated autobiography; the first with Martha Stewart before her trial and then again immediately following sentencing; traveling to Cuba to interview President Fidel Castro 25 years after their first headline-making interview; former Vice President Al Gore in his first formal interview since the controversial 2000 Presidential election; President and Mrs. Bush, who gave “20/20” the first look at the White House at Christmas; a candid conversation with media phenoms The Osbournes; and actor Robert Blake, who spoke out for the first time since being arrested for the murder of his wife. Walters also tackled tough issues surrounding the war with Iraq, including reports on Iraqi women and children who lived through the first Persian Gulf war and now live in America.

At the other extreme, in 1999 Ms. Walters conducted the first interview with Monica Lewinsky, which became the highest-rated news program ever broadcast by a single network.

She has interviewed every American President and First Lady since Richard Nixon. She made journalism history by arranging the first joint interview with Egypt’s President Anwar Sadat and Israel’s Prime Minister Menachem Begin in November, 1977. Another of her “firsts” was an hour-long primetime conversation with Cuban President Fidel Castro — an interview which has been printed in half a dozen languages and shown all over the world.

“The Barbara Walters Specials” are continuously the top-rated specials of the year and have included such legends as Sir Laurence Olivier, Bing Crosby, John Wayne, Bette Davis and Audrey Hepburn and have included such superstars as Simon Cowell, Betty White, Katy Perry Ford, David and Victoria Beckham, Justin Timberlake and George Clooney. In March 2010, Ms. Walters’ hosted her final Oscar special after 29 successful years. Ms. Walters’ “The 10 Most Fascinating People” special broadcast, launched in 1993, offers a year-end review of the most prominent newsmakers of the year, as well as the selection of the “most fascinating” person.

Ms. Walters’ is also creator, co-owner, executive producer and co-host of “The View,” recipient of the 2003 Daytime Emmy® Award for “Outstanding Talk Show.” In August 2009, “The View” hosts received a Daytime Emmy Award for Outstanding Talk Show Host. It was the first time in the 36 year history of NATAS that multiple talk show hosts received this honor. In May 2009, “The View” hosts were chosen as one of the “100 Most Influential People in the World” by Time. In July, 2009 Forbes ranked “The View” #11 among “30 of the Most Influential Women in Media.”

Prior to joining ABC she appeared on NBC’s “Today Show” for 15 years. She began as a writer on the “Today Show,” and within a year became a reporter-at-large, developing, writing and editing her own reports and interviews. In 1963 she became a co-host of the program without the official title, but in 1974 NBC officially designated her as the program’s first female co-host.

Ms. Walters was a member of the NBC News team that went to the People’s Republic of China to cover the visits of President Richard Nixon in 1972 and President Gerald Ford in 1975. In addition to the “Today Show,” for five years Ms. Walters also hosted her own popular syndicated series, “Not for Women Only.” The program went off the air when she left for ABC. Early in her career she was a writer for CBS News and, before that, she was the youngest producer with NBC-TV’s New York station (WNBC-TV).

Ms. Walters is a New York Times best selling author for her very personal and revealing memoir “Audition,” released in 2008.

Over the years Ms. Walters has received national recognition for her work and has been the recipient of numerous prestigious honors and awards. Among these are:

A native of Boston, Ms. Walters is the daughter of the famed entertainment impresario Lou Walters and has one daughter. 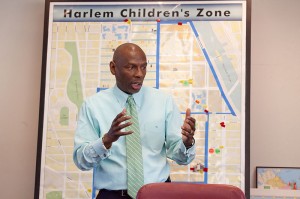 Geoffrey Canada (born January 13, 1952) is an American social activist and educator. Since 1990, Canada has been president and CEO of the Harlem Children’s Zone in Harlem, New York, an organization which states its goal is to increase high school and college graduation rates among students in Harlem.  Canada serves as the Chairman of Children’s Defense Fund‘s Board of Directors.  He was a member of the Board of Directors of The After-School Corporation, a nonprofit organization that aims to expand educational opportunities for all students.

Canada was born in the South Bronx, the third of four sons of Mary Elizabeth Canada (née Williams), a substance abuse counselor, and McAlister Canada.  His parents’ marriage ended in 1956, after which he was raised by his mother; his father played little part in the children’s life and did not contribute financial support.  Canada was raised among the “abandoned houses, crime, violence and an all-encompassing sense of chaos and disorder,” and understood his life’s calling at an early age. His mother sent him to live with her parents in Wyandanch, New York, when Canada was in his mid-teens. He attended Wyandanch Memorial High School, and won a scholarship from the Fraternal Order of Masons during his senior year of high school.  He holds a Bachelor of Arts degree in psychology and sociology from Bowdoin College, where he graduated in 1974, and a Master’s degree in education from the Harvard Graduate School of Education. Canada has honorary degrees from the University of Pennsylvania, Columbia University, Dartmouth College and Princeton University among others.