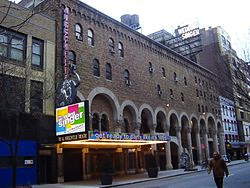 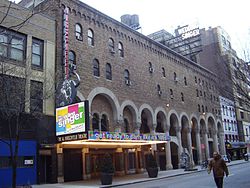 The Al Hirschfeld Theatre, showing the musical The Wedding Singer, 2006.

The Al Hirschfeld Theatre is a Broadway theatre located at 302 West 45th Street in midtown-Manhattan.

Designed by architect G. Albert Lansburgh for vaudeville promoter Martin Beck, the theatre opened as the Martin Beck Theatre with a production of Madame Pompadour on November 11, 1924. It was the only theater in New York that was owned outright without a mortgage. It was designed to be the most opulent theater of its time, and has dressing rooms for 200 actors. The theatre has a seating capacity of 1,424 for musicals.

Famous appearances include Basil Rathbone as Romeo with Katharine Cornell as Juliet in December 1934; Frank Langella in Dracula; Elizabeth Taylor in The Little Foxes; Christina Applegate as the title role in Sweet Charity; David Hyde Pierce as Lt. Coffi in the musical Curtains; and Daniel Radcliffe in the latest revival of How to Succeed in Business Without Really Trying.

On June 21, 2003, it was renamed the Al Hirschfeld Theatre in honor of the caricaturist famous for his drawings of Broadway celebrities, and reopened on November 23, 2003, with a revival of the musical Wonderful Town.

This is one of five theatres owned and operated by Jujamcyn Theaters, who purchased it in 1965 from the Beck family. 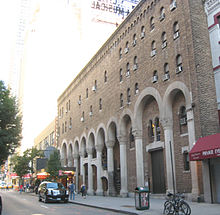