You are here: Home / Education / Politics / US Politics / Day 1 of Impeachment Testimony by Adam Edelman 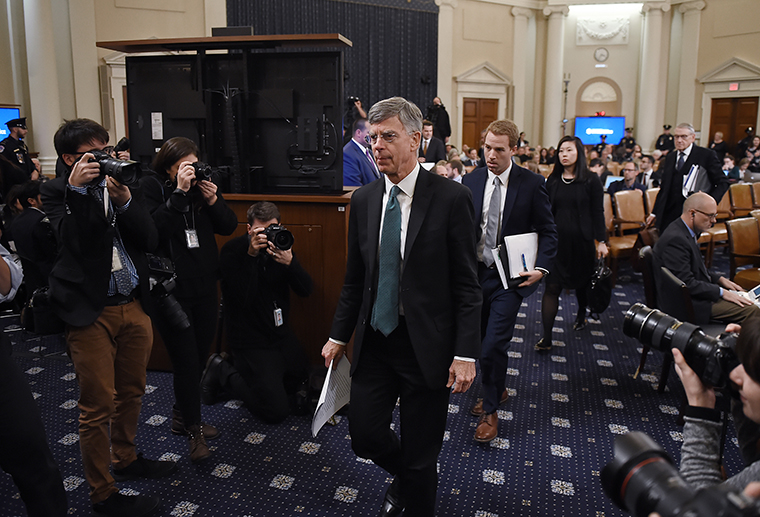 Bill Taylor and George Kent, the first two witnesses in the House impeachment inquiry into President Donald Trump’s dealings in Ukraine, testified for more than five hours Wednesday in a public hearing that saw both men share new — and sometimes shocking — pieces of information.

Taylor, the top U.S. diplomat in Ukraine, and Kent, a deputy assistant secretary of state who worked on Ukraine and five other countries, had testified last month, for hours, in a closed-door setting before the three committees leading the inquiry.

Here are five things we learned from their public appearance on Wednesday.

In his opening statement, Taylor revealed that one of his staffers overheard a phone call between U.S. Ambassador to the European Union Gordon Sondland and President Donald Trump on July 26 — the day after the call between Trump and Ukrainian President Volodomyr Zelenskiy that prompted the impeachment inquiry.

The staffer heard Trump ask Sondland about “the investigations,” Taylor testified, later clarifying to lawmakers that “investigations” meant probes desired by Trump and his personal attorney, Rudy Giuliani, into former Vice President Joe Biden and his son Hunter Biden as well as a conspiracy theory about the 2016 election.

Taylor testified that the staffer said Sondland told Trump that the Ukrainians were “ready to move forward” with those probes.

The staffer, Taylor testified, then asked Sondland what Trump thought about Ukraine. According to Taylor’s account, Sondland said that “Trump cares more about the investigations of Biden.”

The existence of this conversation was previously not known. Taylor said he’d only learned from the staffer about the call last week — weeks after Taylor had appeared before the committees behind closed doors.

While Taylor did not, in his testimony, identify the staffer who overheard that Trump-Sondland conversation, two sources familiar with the matter told NBC News that the aide is David Holmes, the counselor for political affairs at the U.S. Embassy in Ukraine.

As Wednesday’s hearing got underway, two officials working on the impeachment inquiry told NBC News that Holmes will testify behind closed doors to the committees leading the inquiry on Friday.

Taylor testified that White House acting chief of staff Mick Mulvaney was part of an “irregular” shadow communications channel between Washington and Kyiv that had sought a quid pro quo with Ukraine.

NBC News and other multiple other outlets have reported — and several officials have testified — that Mulvaney has played an integral role in the White House’s dealing with Ukraine, but Taylor citing him as a member of the “irregular” team is new. To read more go to the link below: