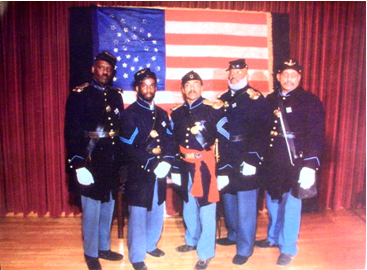 Almost 2,900 Black Jersey-Men served as enlisted men in the ranks of United State Colored Troops (U.S.C.T.) during the Civil War.  Even though locally recruited, USCT regiments were Federal outfits.  These men served in a number of regiments, most of which were raised at Philadelphias Camp William Penn.  At the end of the war, after General Lees surrender, the 22nd marched to Washington and participated in President Lincolns funeral procession followed by their deployment on the Maryland side of the Potomac as the army hunted John Wikes Booth.  With Booths capture and death, the 22nd had one more job to complete.  The French had installed emperor Maximilian in Mexico in violation of the Monroe Doctrine.  The XXV Corps, including the 22nd, was sent to Texas to intimidate the French while pacifying the former Confederate State.  They patrolled the Rio Grande Borders until their recall the Philadelphia in October 1865 where they were mustered out of service.