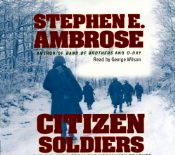 Audio Book Review: Citizen Soldiers: The U.S. Army from the Normandy Beaches to the Bulge to the Surrender of Germany

Citizen Soldiers: The U.S. Army from the Normandy Beaches to the Bulge to the Surrender of Germany, Unabridged, by Stephen E. Ambrose and Narrated by George Wilson 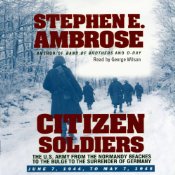 Citizen Soldiers opens on June 7, 1944, on the Normandy beaches, and ends on May 7, 1945. From the high command on down to the enlisted men, Stephen E. Ambrose draws on hundreds of interviews and oral histories from men on both sides who were there. He recreates the experiences of the individuals who fought the battles, the women who served, and the Germans who fought against us.

A masterful biography of the U.S. Army in the European Theater of Operations, Citizen Soldiers provides a compelling account of the extraordinary stories of ordinary men in their fight for democracy. ©1997 Stephen E. Ambrose ℗ 2011 Simon & Schuster.