You are here: Home / Colleges and Universities / Education / Senior's Corner / Where in the World is Libya?

Where in the World is Libya? 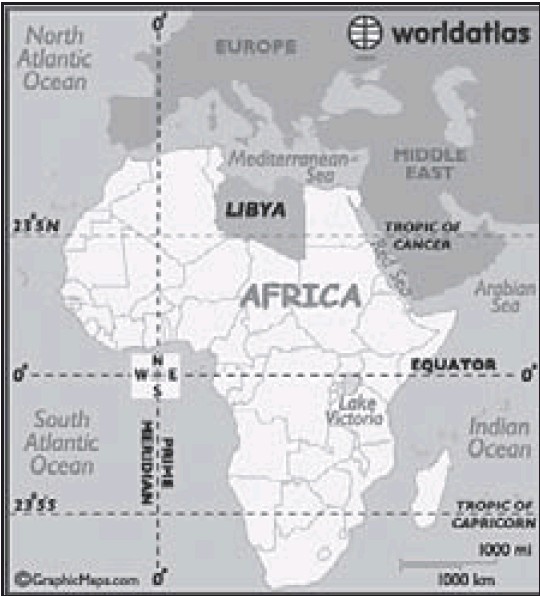 An oil-rich country in North Africa faces an uncertain future as rebels take up arms against a long-term dictator.

IN February, a group of rebels in the North African country of Libya launched an uprising against Libya long-time dictator, Col. Moammar al Qaddafi. The rebels made quick gains in the eastern part of the country, but as they advanced westward toward the capital city of Tripoli, they were met by a fierce response from Qaddafi troops, who had Libya formidable military weapons war planes, bombs, tanks and missiles at their disposal.

Qaddafi unleashed a violent and powerful assault against the opposition forces, and the rebels could not defend themselves against his heavily armed troops or air attacks. Nor, however, could Libyan civilians. The United Nations took the dramatic and controversial step of intervening, authorizing its forces to impose a no-fly zone over Libya, so that Qaddafi could not bomb the rebels. Since then, the two sides have been more evenly matched as they fight a ground war for control of Libya. The future of Libya is uncertain, and the US involvement in the international military intervention in Libya has evoked both support and opposition in this country.

Libya is an oil-rich country located on the north central coast of Africa. Although, like Egypt, it is located on the African continent, it is, also like Egypt, an Arab nation considered part of the volatile region referred to as the Middle East. It is the fourth largest country in Africa and the 17th largest in the world.

Much of Libya is dry, flat desert, but it is an oil-rich country, sitting atop deep reserves of petroleum. While more than half of the country is covered by the Sahara Desert, Libya also claims the 10th largest petroleum reserves in the world. The export of oil and gas fuels Libya economy.

The majority of Libya 6.6 million citizens are of Arab ethnicity and practice the Sunni form of Islam as their religion.

Libya is an ancient land that fell under Italian rule in 1911. Italy retained control until 1951, when Libya won its independence. Libya was ruled by a monarchy until 1969, when a young revolutionary and military leader overthrew Libya king. This leader was Moammar al Qaddafi, and he has ruled Libya ever since, under a form of government he devised himself. Libya claims to be a democracy selfgoverned by its citizens, but the rest of the world considers Qaddafi to be a dictator.

Under Qaddafi, Libya has had strained relations with the US due to Qaddafi links to terrorism, specifically attacks against Americans, including the bombing of a German nightclub in the 1980s that killed American soldiers. US President Ronald Reagan retaliated for this by bombing Tripoli.

In 1988, Libya bombed Pan Am Flight 103 over Lockerbie, Scotland. All 259 passengers and crewmembers died, including 189 Americans, Libya is the fourth largest country in Africa and the 17th largest in the world. as well as 11 people on the ground. The tragedy outraged the world, and the United Nations imposed strict sanctions against Libya, isolating Qaddafi from the rest of the world.

At the time, Libya would not admit responsibility, and it took years to bring the bombers two Libyan intelligence officers to justice.

In recent years, Libya had rehabilitated its relations with the outside world. Qaddafi renounced terrorism, dismantled his weapons of mass destruction program, began to receive foreign dignitaries and most importantly, in 2003, took responsibility for the Lockerbie bombing. The United Nations lifted its sanctions and allowed Libya to rejoin the organization. The US, in 2008, also normalized relations with Libya.