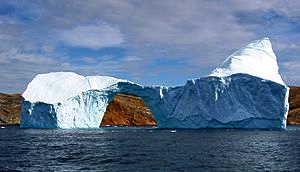 History of Water 1: the struggle for our daily water

History of Water 1: the struggle for our daily water.

Water in three states: liquid, solid (ice), and water vapor(cloud) in the air. Clouds are accumulations of water droplets, condensed from vapor-saturated air.

Water is a chemical compound with the chemical formula H2O. A water molecule contains one oxygen and two hydrogen atoms connected by covalent bonds. Water is a liquid at standard ambient temperature and pressure, but it often co-exists on Earth with its solid state, ice, and gaseous state (water vapor or steam). Water also exists in a liquid crystal state near hydrophilic surfaces.

Water covers 71% of the Earth’s surface, and is vital for all known forms of life.  On Earth, 96.5% of the planet’s water is found in seas and oceans, 1.7% in groundwater, 1.7% in glaciers and the ice caps of Antarctica and Greenland, a small fraction in other large water bodies, and 0.001% in the air as vapor, clouds (formed of solid and liquid water particles suspended in air), and precipitation.  Only 2.5% of the Earth’s water is freshwater, and 98.8% of that water is in ice and groundwater. Less than 0.3% of all freshwater is in rivers, lakes, and the atmosphere, and an even smaller amount of the Earth’s freshwater (0.003%) is contained within biological bodies and manufactured products.

Safe drinking water is essential to humans and other lifeforms even though it provides no calories or organic nutrients. Access to safe drinking water has improved over the last decades in almost every part of the world, but approximately one billion people still lack access to safe water and over 2.5 billion lack access to adequate sanitation.  There is a clear correlation between access to safe water and GDP per capita.  However, some observers have estimated that by 2025 more than half of the world population will be facing water-based vulnerability.  A recent report (November 2009) suggests that by 2030, in some developing regions of the world, water demand will exceed supply by 50%.  Water plays an important role in the world economy, as it functions as a solvent for a wide variety of chemical substances and facilitates industrial cooling and transportation. Approximately 70% of the fresh water used by humans goes to agriculture. 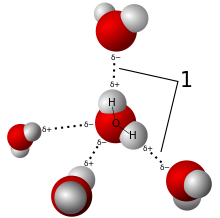 Model of hydrogen bonds (1) between molecules of water 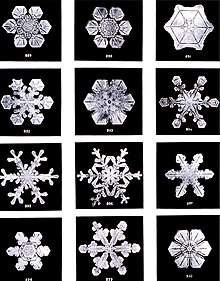 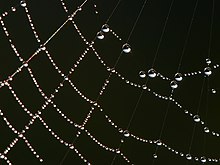 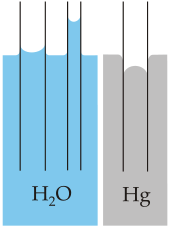 Water is the chemical substance with chemical formula H2O: one molecule of water has two hydrogen atoms covalentlybonded to a single oxygen atom.

Water appears in nature in all three common states of matter (solid, liquid, and gas) and may take many different forms on Earth: water vapor and clouds in the sky, seawater in the oceans, icebergs in the polar oceans, glaciers and rivers in the mountains, and the liquid in aquifers in the ground.

The major chemical and physical properties of water are:

Water can dissolve many different substances, giving it varying tastes and odors. Humans and other animals have developed senses that enable them to evaluate the potability of water by avoiding water that is too salty or putrid. The taste of spring waterand mineral water, often advertised in marketing of consumer products, derives from the minerals dissolved in it. However, pure H2O is tasteless and odorless. The advertised purity of spring and mineral water refers to absence of toxins, pollutants andmicrobes, not the absence of naturally occurring minerals.

Distribution in nature – In the universe

Much of the universe’s water is produced as a byproduct of star formation. When stars are born, their birth is accompanied by a strong outward wind of gas and dust. When this outflow of material eventually impacts the surrounding gas, the shock waves that are created compress and heat the gas. The water observed is quickly produced in this warm dense gas.

On 22 July 2011 a report described the discovery of a gigantic cloud of water vapor containing “140 trillion times more water than all of Earth’s oceans combined” around a quasar located 12 billion light years from Earth. According to the researchers, the “discovery shows that water has been prevalent in the universe for nearly its entire existence.”

Water has been detected in interstellar clouds within our galaxy, the Milky Way. Water probably exists in abundance in other galaxies, too, because its components, hydrogen and oxygen, are among the most abundant elements in the universe. Interstellar clouds eventually condense into solar nebulae and solar systems such as ours.

Water vapor is present in

Liquid water is present on

Strong evidence suggests that liquid water is present just under the surface of Saturn’s moon Enceladus.

Water ice is present on

Recent evidence points to the existence of water ice at the poles of Mercury.  Water ice may also be present on Ceres and Tethys. Water and other volatiles probably comprise much of the internal structures of Uranus and Neptune and the water in the deeper layers may be in the form of ionic water in which the molecules break down into a soup of hydrogen and oxygen ions, and deeper down as superionic water in which the oxygen crystallises but the hydrogen ions float around freely within the oxygen lattice.

Some of the Moon’s minerals contain water molecules. For instance, in 2008 a laboratory device which ejects and identifies particles found small amounts of the compound in the inside of volcanic rock brought from Moon to Earth by the Apollo 15 crew in 1971.  NASA reported the detection of water molecules by NASA’s Moon Mineralogy Mapper aboard the Indian Space Research Organization’s Chandrayaan-1 spacecraft in September 2009.

The existence of liquid water, and to a lesser extent its gaseous and solid forms, on Earth are vital to the existence of life on Earth as we know it. The Earth is located in the habitable zone of the solar system; if it were slightly closer to or farther from the Sun (about 5%, or about 8 million kilometers), the conditions which allow the three forms to be present simultaneously would be far less likely to exist.

Earth’s gravity allows it to hold an atmosphere. Water vapor and carbon dioxide in the atmosphere provide a temperature buffer (greenhouse effect) which helps maintain a relatively steady surface temperature. If Earth were smaller, a thinner atmosphere would allow temperature extremes, thus preventing the accumulation of water except in polar ice caps (as on Mars).

The surface temperature of Earth has been relatively constant through geologic time despite varying levels of incoming solar radiation (insolation), indicating that a dynamic process governs Earth’s temperature via a combination of greenhouse gases and surface or atmospheric albedo. This proposal is known as the Gaia hypothesis.

The state of water on a planet depends on ambient pressure, which is determined by the planet’s gravity. If a planet is sufficiently massive, the water on it may be solid even at high temperatures, because of the high pressure caused by gravity, as it was observed on exoplanets Gliese 436 b and GJ 1214 b.

There are various theories about origin of water on Earth.

On Earth – Hydrology and Water distribution on Earth 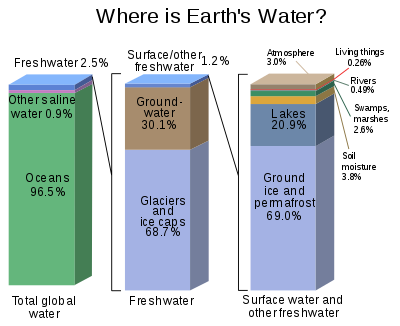 A graphical distribution of the locations of water on Earth. 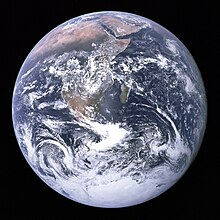 Water covers 71% of the Earth’s surface; the oceans contain 96.5% of the Earth’s water. The Antarctic ice sheet, which contains 61% of all fresh water on Earth, is visible at the bottom. Condensed atmospheric water can be seen as clouds, contributing to the Earth’s albedo.

Liquid water is found in bodies of water, such as an ocean, sea, lake, river, stream, canal, pond, orpuddle. The majority of water on Earth is sea water. Water is also present in the atmosphere in solid, liquid, and vapor states. It also exists as groundwater in aquifers.

Water is important in many geological processes. Groundwater is present in most rocks, and the pressure of this groundwater affects patterns of faulting. Water in the mantle is responsible for the melt that produces volcanoes at subduction zones. On the surface of the Earth, water is important in both chemical and physical weathering processes. Water and, to a lesser but still significant extent, ice, are also responsible for a large amount of sediment transport that occurs on the surface of the earth.  Deposition of transported sediment forms many types of sedimentary rocks, which make up the geologic record of Earth history. 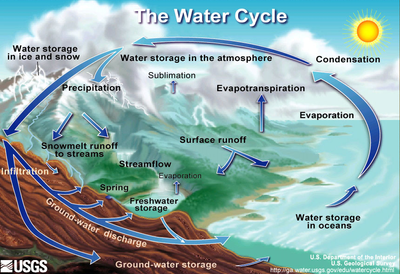 The water cycle (known scientifically as the hydrologic cycle) refers to the continuous exchange of water within the hydrosphere, between the atmosphere, soilwater, surface water, groundwater, and plants.

Water moves perpetually through each of these regions in the water cycle consisting of following transfer processes:

Most water vapor over the oceans returns to the oceans, but winds carry water vapor over land at the same rate as runoff into the sea, about 47 Tt per year. Over land, evaporation and transpiration contribute another 72 Tt per year. Precipitation, at a rate of 119 Tt per year over land, has several forms: most commonly rain, snow, and hail, with some contribution from fog and dew.  Dew is small drops of water that are condensed when a high density of water vapor meets a cool surface. Dew usually form in the morning when the temperature is the lowest, just before sunrise and when the temperature of the earth’s surface starts to increase.  Condensed water in the air may also refract sunlight to produce rainbows.

Water runoff often collects over watersheds flowing into rivers. A mathematical model used to simulate river or stream flow and calculate water quality parameters is hydrological transport model. Some of water is diverted to irrigation for agriculture. Rivers and seas offer opportunity for travel and commerce. Through erosion, runoff shapes the environment creating river valleys anddeltas which provide rich soil and level ground for the establishment of population centers. A flood occurs when an area of land, usually low-lying, is covered with water. It is when a river overflows its banks or flood from the sea. A drought is an extended period of months or years when a region notes a deficiency in its water supply. This occurs when a region receives consistently below average precipitation. 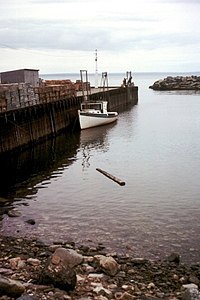 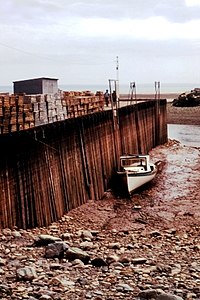 Some runoff water is trapped for periods of time, for example in lakes. At high altitude, during winter, and in the far north and south, snow collects in ice caps, snow pack and glaciers. Water also infiltrates the ground and goes into aquifers. This groundwater later flows back to the surface in springs, or more spectacularly in hot springs and geysers. Groundwater is also extracted artificially in wells. This water storage is important, since clean, fresh water is essential to human and other land-based life. In many parts of the world, it is in short supply.

Sea water contains about 3.5% salt on average, plus smaller amounts of other substances. The physical properties of sea water differ from fresh water in some important respects. It freezes at a lower temperature (about −1.9 °C) and its density increases with decreasing temperature to the freezing point, instead of reaching maximum density at a temperature above freezing. The salinity of water in major seas varies from about 0.7% in the Baltic Sea to 4.0% in the Red Sea.