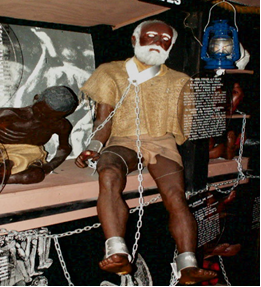 Slave Ships on the Delaware: A Story of Camden, New Jersey

An eight-minute documentary about the 18th-century river slave trade in Camden, New Jersey.

The New Jersey scandal might never have come to light had it not been for the involvement of Jacob Van Wickle and his collaboration with Col. Charles Morgan in exporting black to Louisiana.  Jacob Van Wickle was a Landed Proprietor in Old Bridge, New Jersey, near South Amboy, and had served on the board of freeholders of South Amboy, as a justice of the peace, and as a judge of the Court of Common Pleas in Middlesex County.  He had married Sarah Morgan, daughter of James Morgan (a captain in the second regiment of the Middlesex County Militia during the Revolutionary War), and sister of Charles.  Both Jacob and Sarah Van Wickle were buried in the Episcopalian Church yard at Spotswood, New Jersey.

Sending New Jersey slaves to New Orleans was a highly profitable business.  At that time, prime field hands were selling for $1,100 in New Orleans, while in New Jersey the highest price for an able-bodied young black may have been $300.  Newspaper advertisement indicates that mothers with young children were particularly hard to see in the local market.  During the spring of 1818, Philadelphia newspaper accused Jacob Van Wickle of using his power as a Judge of the Court of Common pleas to organize the illegal removal of blacks from New Jersey.  According to these reports, Van Wickle, his slave ring held the blacks they had bought at the Van Wickle estate, keeping them under constant guard.

Newspaper described Van Wickles home as a garrison and agreed that the so call â€œSouth River Establishmentâ was the principal depot for New Jersey slaves before they were sold to the south.  It was alleged that bribes, false promises of freedom, and fear pressured these blacks to agree to leave New Jersey.  One story especially caused public consternation.  Kidnappers had apparently stolen a black boy from Philadelphia and forcible detained him at the Van Wickle House against the will of his owner, who had great difficulty in recovering him.  On June 1, 1818, the Trenton Federalist denounced the slave trade that was carried on from Morgans House at South River,

New Jersey.  The newspaper acknowledged other persons had been described as active agents in the business but discreetly suggested that this might not be true.

The fact that Morgans House belonged to Jacob Van Wickle was not mentioned.  In early June the Grand Jury of Middlesex County handed down seventeen indictments charging Charles Morgan with removing sixteen black children from New Jersey without their consents, and one adult slave by force.  Yet, Jacob Van Wickle was the only player in the New Jersey scandal who was not indicted by the Grand Jury.  He may have escaped indictment because he placed the blacks in the names of his son or other members of the circle.