You are here: Home / Events / US Emergency Spills / Toms River 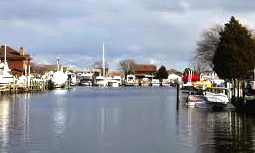 Toms River: How a Small Town Fought Back Against Corporate Giants for Toxic Dumping Linked to Cancer

Environmental reporter Dan Fagin joins us to discuss his book, “Toms River: A Story of Science and Salvation,” which has just won the Pulitzer Prize for General Non-Fiction. Fagin tells the story of how a small New Jersey town fought back against industrial pollution and astronomical rates of childhood cancer, and ultimately won one of the largest legal settlements in U.S. history. “We don’t look for patterns, we don’t analyze those patterns. That is a terrible tragedy,” Fagin says of the failure to examine environmental and industrial data gathered by local, state and federal agencies. “People are dying because we do not do effective public health surveillance in this country.”

NERMEEN SHAIKH: We spend the rest of the hour looking at a fascinating story of a small town ravaged by industrial pollution, a town suffering from astronomical rates of childhood cancers scientifically linked to local air and water pollution, a town that ultimately came together, fought back and won one of the largest legal settlements in the annals of toxic dumping. That town is Toms River in New Jersey, and it’s the focus of a new book that has just won the Pulitzer Prize for General Non-Fiction. In Toms River: A Story of Science and Salvation, environmental reporter Dan Fagin recounts the 60-year saga of rampant pollution and inadequate oversight that makes Toms River a cautionary example for industrial towns, not just in the United States, but also in other countries like China.

Two of the Toms River residents who share their ordeal in the book are Linda Gillick and her son Michael, whose fast-growing tumors decimated his body. This is Linda, followed by Michael, speaking to the show Earth Focus.

LINDA GILLICK: I was 30 when I had Michael. You know, the first 30 years of our lives were carefree, like any young couple, you know, trying to pay your bills, enjoy life and doing things. And then you get a child that has cancer, and your whole life changes completely. It now is surrounded and revolves around your child that is sick.

MICHAEL GILLICK: I was diagnosed with neuroblastoma, which is a cancer of the sympathetic nervous system, and still have effects of it today.

LINDA GILLICK: Michael is alive. He’s a miracle. He’s received the last rites many times. He is 34 years old, has very limited normalcy to his life.

MICHAEL GILLICK: The tumor is pushing my spine pretty much out of my body, like it’s wearing away the skin. It’s also encompassed—like it wraps around, like, all my organs—my heart, lungs, kidneys, all that. And there’s no surgical way to remove it without me either bleeding out on the table or becoming a vegetable, I was told.