You are here: Home / Education / Senior's Corner / The Shadow of My Father’s Hand

The Shadow of My Father’s Hand 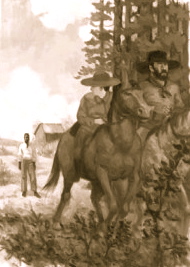 THE STORY SO FAR: Even with the threat of violence nearby, there is time for occasional fun with friends. But our narrator is confused when his best friend John’s sister, Ettie, stirs unexpected feelings in his young heart.

The sun is booming in a clear blue sky. Across the valley sits the Daley farm, fields burnished with young, green shoots. Mr. Daley, too old to go to war, still grows the best and biggest crops around.

This spring, I followed as he planted rows of corn. A canvas sack slung over his left shoulder, stooped and pressing the good black earth around the seed, he told me, “Corn is like a child.

You got to love it just a little, and tuck it in just so, and then you pray for God to give it sun and rain.”  Once a week, he hitches up his wagon, drives across the valley, and checks on me.  What men are left I listen to, and try to farm the way Pa would have done.

John’s pa—i call him Pappy— comes by most daily, bends and takes my fledgling shoots between his fingers, rubs them, tastes the dirt and stands again, a smile and a nod, then wipes his big hands on his overalls.

His own farm’s rich with truck: melons, beans, tomatoes, squash, and peas— he feeds near half the town, and won’t take money for it.  My pa, when he was here, would shake his head.  “Some men,” he’d say, “would be too angry to do anything for the people of this town.”

For twenty years, Pappy was a slave on Daley’s farm, but the old man was fond of him, or so the story goes, and gave him freedom and a piece of land.

John says he still remembers sitting at dusk beneath a spreading oak with his family and the other slaves, listening to the old ones talk about their lives.  Mr. Daley is a kind man, has always been.

He never whipped a man or broke up families, and so their lives were not too bad, except they were not free. Pappy says Mr. Daley set him free when a white man from the town got hold of Joshua, John’s brother, and beat him till his eyes glazed over.

It was weeks before he’d get back out of bed, and then his mind was gone.  Right after that, Daley moved them here, just down the road from us. In time, we came to be best friends, John and me. We’d spend our days down by the crick, gigging frogs and whittling sticks. It was hard when Pa decided we would go to fight for Tennessee. I remember how confused and hurt John looked when we set out to join the Rebs.

He stood and waved as if it was the last he’d ever see of us. Then his arms dropped to his sides.  I could see his eyes mist over, and a tear began to roll slowly down his cheek.

He dragged his sleeve across his face, stood up straight and said, “Ya’ll get back just as soon as you are able, hear?” I nodded, turned my horse, and off we rode to war.