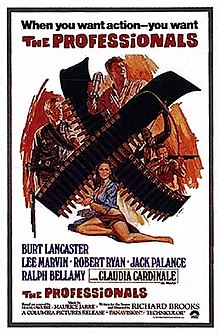 The Professionals is a 1966 American western starring Burt Lancaster, Lee Marvin, Claudia Cardinale, Robert Ryan, and Woody Strode. The supporting cast includes Jack Palance and Ralph Bellamy and the film was written and directed by Richard Brooks, whose screenplay was based upon the novel A Mule for the Marquesa by Frank O’Rourke. 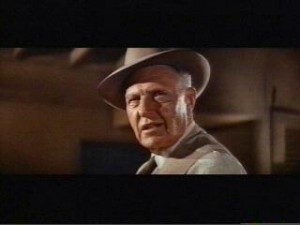 Team leader Henry “Rico” Fardan (Lee Marvin) is a weapons specialist, Bill Dolworth (Burt Lancaster) is an explosives expert, the horse wrangler is Hans Ehrengard (Robert Ryan) and Jake Sharp (Woody Strode) is a scout with traditional Apache skills, particularly with a bow and arrow. Fardan and Dolworth, having both fought under the command of Pancho Villa, have a high regard for Raza as a soldier. But as hard and cynical professionals, they have no qualms about killing him now.

After crossing the Mexican border, the team tracks the bandits to their hideout. They bear witness as soldiers on a government train are massacred by Raza’s small army. The professionals follow the captured train to the end of the line and retake it from the bandits. Some move on to the bandit camp and observe Raza and his followers — including a buxom soldier, Chiquita (Marie Gomez). At nightfall, Fardan infiltrates Raza’s private quarters but he is stopped from killing him by Maria, the kidnapped wife. “Amigo,” Dolworth concludes, “we’ve been had.”

Fardan does what he is being paid for and escapes with Grant’s wife. Back at the train, the men find that it has been retaken by the bandits. After a shootout, they retreat into the mountains, hotly pursued by Raza and his men. The professionals evade capture by using explosives to bring down the prepared walls of a gully, thus blocking the Raza and the bandits’ path and delaying their pursuit. It is then revealed that they had not rescued his kidnapped wife but Raza’s willing mistress. Grant “bought” Maria for an arranged marriage only for her to escape and return to her “true love” in Mexico.

But as Raza and his group of bandits relentlessly pursue the retreating professionals, Dolworth fights the bandits in a rearguard action to allow the other professionals with Maria to escape. The bandit leader Raza is wounded. As Raza with fellow bandit, Chiquita in the lead attempt to escape, she is shot by Dolworth, who himself narrowly escapes her bullet as she lies dying in his arms. Weakened, Raza is captured by Dolworth.

The four professionals, with Maria and Raza, reach the U.S. border to be met by Grant and his own men. Grant tells Fardan that their contract has been satisfactorily concluded, even before Maria is safely handed over to him.

As Maria tends the wounded Raza on the ground, Grant callously turns to one of his men and says, “Kill him.” But before the man can shoot, the gun is shot out of his hand by Dolworth who tells Grant he has not earned the right to kill a man like Raza. The four professionals then step in to protect Maria and Raza. Maria, apparently, never was kidnapped from Grant by Raza after all. The professionals collect the wounded Raza, put him on a carriage and, with Maria at the reins, send both back to Mexico. Grant loses his wife, the professionals their reward.

Grant calls Fardan a bastard, to which Fardan retorts: “Yes, sir, in my case an accident of birth. But you, sir, you are a self-made man.” The professionals follow the departing carriage to Mexico. 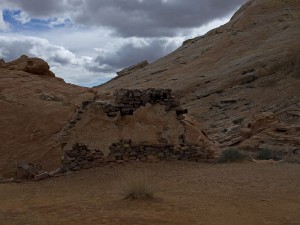 The remains of the set for the film (Mexican hacienda), Valley of Fire State Park

During the filming of a scene where Maria attempts to escape through a canyon wired with dynamite, Cardinale’s stunt double was badly injured. Cardinale, who had never ridden a horse before, performed the stunt herself in the final cut.

The movie was filmed in Technicolor on location in Death Valley and the Valley of Fire, showing the latter prominently. During filming, the cast and crew stayed in Las Vegas. Actor Woody Strode wrote in his memoirs that he and Marvin got into a lot of pranks, on one occasion shooting an arrow into Vegas Vic, the famous smiling cowboy neon sign outside The Pioneer Club.

Portions of the film were shot in the Coachella Valley, California.  The railway scenes were filmed on Kaiser Steel‘s Eagle Mountain Railroad. The steam locomotive seen in the movie currently resides on the Heber Valley Railroad.

Burt Lancaster and Lee Marvin did not get along during filming due to Marvin’s alcoholism, which was making him unreliable and difficult at the time, infuriating Lancaster. Director Richard Brooks, who had worked with Lancaster before, felt the need to intervene because he feared Lancaster was going to “take Lee Marvin by the ass and throw him off that mountain.”

The movie was released the year Lee Marvin won the Oscar for Cat Ballou (1965) and the year before his World War II smash hit The Dirty Dozen (1967). Marvin’s other most famous role, as Liberty Valance in John Ford‘s The Man Who Shot Liberty Valance opposite James Stewart and John Wayne, had been filmed in 1962.

The cast listing at the very beginning of the film remains most unusual in that the billing appears out of order. Lee Marvinis shown first, demonstrating a machine gun while his name superimposes on the screen, Robert Ryan is billed next over a sequence in which he knocks down a man for punching a horse, then Woody Strode is shown subduing an unruly prisoner that he’s just brought into a frontier town, and finally Burt Lancaster‘s name appears over a humorous scene with Lancaster in bed with another man’s wife then subsequently hurriedly escaping down a street after being interrupted by the furious husband. Lancaster actually has top billing but is billed under the other Professionals as a visual punchline at the top of the film, then at the movie’s conclusion is listed first over Lee Marvin, Robert Ryan, and Woody Strode as they ride toward the camera. 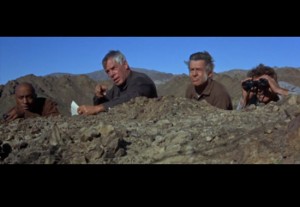 The film won two Motion Picture Magazine Laurel Awards in 1967, for Best Action Drama and Best Action Performance for Lee Marvin. In Germany, it was one of only four movies to receive a Golden Screen award (the others were Doctor Zhivago, Merveilleuse Angélique and You Only Live Twice) in 1967.