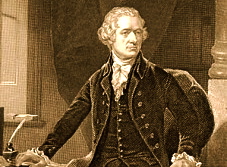 ALEXANDER HAMILTON, one of the great, visionary “founding fathers” of the United States, was born on Jan. 11, 1755 in the West Indies. A very good student, he was sent to New York to continue his education and attended Kings College, now Columbia University. It was the early 1770’s, when the movement toward independence from England was sweeping the 13 colonies. Hamilton caught the patriotic fever, and began to attract attention for his speeches and pamphlets advocating for independence.

During the Revolutionary War, Hamilton joined a militia and was eventually recruited by then Gen. George Washington to serve as one of his close aides. Hamilton attended law school, married, and started a family that would eventually include eight children. Professionally, he worked as a lawyer and was elected to the New York state legislature, where he became involved in establishing the new government of the new nation – the United States of America.

Hamilton was opposed to the Articles of Confederation, the first document outlining the law of the land and the predecessor to the U.S. Constitution. The Articles of Confederation, put into practice, were found to have serious flaws and a convention was called to address the problems. This meeting, the Annapolis Convention, led to the convening of the Constitutional Convention in Philadelphia, during which the Constitution was crafted. Hamilton advocated for a strong federal, or central government, as opposed to those founding fathers that wanted the individual states to retain broad authority of self-governance.

Although the Constitution did not, in the end, reflect Hamilton’s views, he strongly supported its ratification. He contributed to authoring a series of articles arguing the case for passage, known as the Federalist Papers. It is believed that Hamilton wrote 51 of 85 such articles, the remainder written by John Jay and James Madison.

Hamilton served as the United State’s first Secretary of the Treasury in the administration of the first president, George Washington. He established the First Bank of the United States and the US Mint. His passionate beliefs in a strong central, or federal, government began to put him at odds with other prominent political figures, notably future-president and then-secretary of State Thomas Jefferson, who believed strongly in keeping power with the states. Hamilton helped Thomas Jefferson, a political opponent, get elected the third president of the United States. Another long-time opponent of Hamilton’s, Aaron Burr, became Vice President. Hamilton and Burr were bitter enemies due to a political feud between the two families, and the public statements Hamilton would make criticizing Burr. Their famous duel took place in Weehawken, NJ, on the banks of the Hudson River, on July 11, 1804. Burr shot Hamilton, and Hamilton died from his wounds on July 12, 1804.