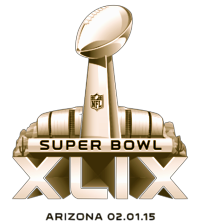 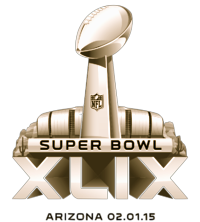 Super Bowl XLIX is an upcoming American football game between the American Football Conference (AFC) champion New England Patriots and National Football Conference (NFC) champion Seattle Seahawks to decide the National Football League (NFL) champion for the 2014 season. The game is scheduled to be played on February 1, 2015, at University of Phoenix Stadium in Glendale, Arizona. Kickoff is scheduled for 4:30pm MST (6:30pm EST/23:30 UTC). This will be the second Super Bowl played in that stadium (XLII), and the third one held in the Phoenix metropolitan area (XXX at Sun Devil Stadium in Tempe). The game will be broadcast in the United States by NBC.

Arrowhead Stadium was originally selected for Super Bowl XLIX, but plans to add a retractable roof ultimately fell through.

NFL owners initially voted in November 2005 to award a Super Bowl to Kansas City, Missouri, in honor of Chiefs owner Lamar Hunt, the founder of the American Football League (AFL) in the 1960’s who helped engineer the annual game. Then-NFL Commissioner Paul Tagliabue further announced on March 5, 2006, that Kansas City would host Super Bowl XLIX. However, the game was contingent on the successful passage of two sales taxes in Jackson County, Missouri, on April 4, 2006.

The first tax to fund improvements to Arrowhead and neighboring Kauffman stadiums passed with 53 percent approval. However, the second tax that would have allowed the construction of a rolling roof between the two stadiums was narrowly defeated, with 48 percent approval. In the wake of the defeat, and opposition by the Kansas City Chamber of Commerce and several civic and business groups, Hunt and the Chiefs announced on May 25, 2006, that they were withdrawing the request to host Super Bowl XLIX.

University of Phoenix Stadium in Glendale, Arizona, was chosen for Super Bowl XLIX.

After the Kansas City plan fell through, the following submitted bids to host Super Bowl XLIX: