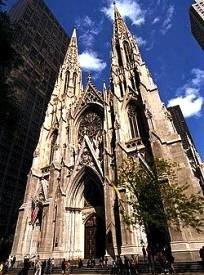 St. Patrick’s Cathedral is one of Ireland’s best-known and largest cathedrals. Saint Patrick is said to have baptised people here at a well beside the River Poddle. The river still runs under St Patrick Street near the Cathedral. The most famous person associated with St Patrick’s is Dean Jonathan Swift who wrote ‘Gulliver’s Travel’s. This video is designed as a resource for second level students completing the Junior Cycle History Curriculum. 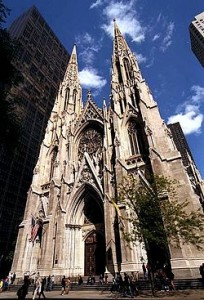 The Cathedral of St. Patrick

(commonly called St. Patrick’s Cathedral) is a decorated Neo-Gothic-style Roman Catholic cathedral church in the United States and a prominent landmark of New York City. It is the seat of the archbishop of the Roman Catholic Archdiocese of New York, and a parish church, located on the east side of Fifth Avenue between 50th and 51st Streets in midtown Manhattan, New York City, New York, directly across the street from Rockefeller Center and specifically facing the Atlas statue.

According to Catholic News Service (CNS) and the Catholic News Agency(CNA), Cardinal Timothy Michael Dolan, the incumbent Archbishop of New York, announced before reviewing the city’s parade on St. Patrick’s Day 2012 that the Cathedral would undergo a massive five-year, three-phase, $175 million renovation because of crumbling bricks, faulty heating, and acid rainand pollution that has eaten away at the Tuckahoe marble of the 135-year-old church. Early donors and grants from the Archdiocese and the Trustees of the Cathedral have already raised $45 million for the first phase, which began in late March. This involves repairing, restoring, and cleaning the soot-covered exterior, and an extensive cleaning of the outside and inside surfaces of the stained glass windows. The Cathedral will remain open during the renovations and work will pause during Masses, according to the Cathedral’s rector, Monsignor Robert T. Ritchie. 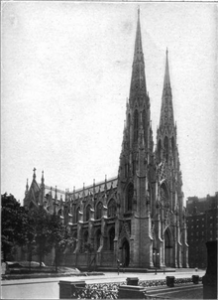 History – Purchase of the Property

The land on which the present cathedral sits was purchased in 1810.  The Jesuit community built a college on the site, three miles north of the city. It contained a “fine old house,” which was fitted with a chapel of St. Ignatius.  The school closed in 1814 and the Jesuits sold the lot to the diocese. In 1813, the diocese gave use of the property to Dom Augustin LeStrange, abbot of a community of Trappists (from the original monastery of La Trappe) who came to America fleeing persecution by French authorities. In addition to a small monastic community, they also looked after some thirty-three orphans. With the downfall of Napoleon in that year, the Trappists returned to France in 1815, abandoning the property. The property at this point was designated for a future cemetery. The neighboring orphanage was maintained by the diocese into the late nineteenth century. Some of the Trappists resettled to Canada and eventually founded St. Joseph’s Abbey in Spencer, Massachusetts.

Bishop DuBois reopened the chapel in 1840 for Catholics employed at the Deaf and Dumb Asylum and in the general neighborhood.  A modest frame church was built for the parish of St. John the Evangelist and dedicated May 9, 1841 by the Rev. John Hughes, administrator of the diocese. Tickets were sold to the dedication to ease the parish’s debt level, managed by a lay Board of Trustees, but to no avail and the property mortgage was finally foreclosed on and the church sold at auction in 1844.  The stress is said to have contributed to the death that year of the church’s pastor, the Rev. Felix Larkin.  The experience was blamed on the management of the trustees and this incident is said to have played a significant role in the abolishment of the lay trusteeship, which occurred shortly thereafter.  The young and energetic Rev. Michael A. Curran was appointed to raise funds for the devastated parish, and shortly fitted up an old college hall as a temporary church.  Fr. Curran continued raising funds to buy back the church during the Great Famine in Ireland, eventually succeeding and taking the deed in his own name. “The site of St. Patrick’s Cathedral, hence, came to the Church through the labors of this young priest and the self-denial of his countrymen and not by the gift of the city.”  The debt was finally all paid for by 1853 when it was clear a large church was needed and the site was selected as appropriate for the new cathedral. 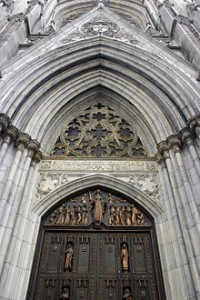 Construction of the Cathedral

The Diocese of New York, created in 1808, was made an archdiocese by Pope Pius IX on July 19, 1850. In 1853, Archbishop John Joseph Hughes announced his intention to erect a new cathedral to replace the Old Saint Patrick’s Cathedral in downtown Manhattan. The new cathedral was designed by James Renwick, Jr. in the Gothic Revival style. On August 15, 1858, the cornerstone was laid, just south of the diocese’s orphanage. At that time, present-day midtown Manhattan was far north of the populous areas of New York City.

Work was begun in 1858 but was halted during the Civil War and resumed in 1865. The cathedral was completed in 1878 and dedicated on May 25, 1879, its huge proportions dominating the midtown of that time. The archbishop’s house and rectory were added from 1882 to 1884, and an adjacent school (no longer in existence) opened in 1882. The spires were added in 1888, and an addition on the east, including a Lady chapel, designed by Charles T. Mathews, was begun in 1900.  The Lady Chapel’s stained-glass windows were made between 1912 and 1930 by English stained glass artist and designer Paul Vincent Woodroffe.  In 1927 and 1931, the cathedral was renovated, which included enlarging the sanctuary and installing the great organ.  The cathedral and associated buildings were declared a National Historic Landmark in 1976.

An extensive restoration of the cathedral was begun in 2012 and is planned to last 3 years at a cost of $177 million.