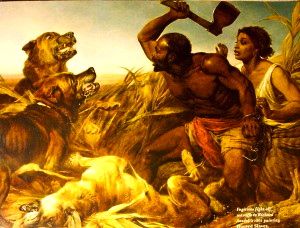 The west bank of the Hudson River was, like New York and Pennsylvania, originally part of the Dutch colony of New Netherland, and it faced the same chronic shortage of free labor as the rest of the region. The English proprietors who established New Jersey colony after the British take-over in 1664 were even more aggressive than the neighbor states in encouraging African slavery as a means to open up the land for agriculture and commerce. They offered 60 acres of land, per slave, to any man who imported slaves in 1664.

Slavery had obtained legal sanction in New Jersey under the proprietary regimes of Berkeley and Carteret. In 1702, when New Jersey became a crown colony, Gov. Edward Cornbury was dispatched from London with instructions to keep the settlers provided with “a constant and sufficient supply of merchantable Negroes at moderate prices.” He likewise was ordered to assist slave traders and “to take especial care that payment be duly made.”

“These instructions became settled policy, and the slave traffic became one of the prefered branches of New Jersey’s commerce. In rejecting a proposed slave tariff in 1744, the Provincial Council declared that nothing would be permitted to interfere with the importation of Negroes. The council observed that slaves had become essential to the colonial economy, since most entrepreneurs could not afford to pay the high wages commanded by free workers.”

Slaves were especially numerous around Perth Amboy, which was the colony’s main port of entry. “By 1690, most of the inhabitants of the region owned one or more Negroes.” A 1745 census showed that 74 percent of the slaves in the colony lived in 5 eastern counties, even though these were not the most populous counties in New Jersey. From 2,581 in 1726, New Jersey’s slave population grew to nearly 4,000 in 1738. Slaves accounted for about 12 percent of the colony’s population up to the Revolution.

From 1713 (after a violent slave uprising in New York) to 1768, the colony operated a separate court system to deal with slave crimes. Special punishments for slaves remained on the books until 1788. The colony also had laws meant to discourage slave revolts. Slaves were forbidden to carry firearms when not in the company of their masters, and anyone who gave or lent a gun to a slave faced a fine of 20 shillings. Slaves could not assemble on their own or be in the streets at night. Controls were further tightened during times of crisis. During Queen Anne’s War, any slave found more than five miles from home without a pass was to be flogged, and the master was required to pay a reward to the person who had reported the infraction.

Slaves guilty of arson were subject to punishments severe even by Northern standards: they were to be put to death in a way that “the aggravation or enormity of their crime shall merit and require.” Thus, in 1735, a slave in Bergen County who attempted to set fire to a house was burned at the stake. Six years later, authorities in Hackensack burned at the stake two slaves who had been setting fire to barns.

Yet in spite of these precautions, New Jersey narrowly escaped a violent slave uprising in 1743. Somehow word had spread among slaves in Burlington County that Great Britain had outlawed slavery and they were being held in bondage illegally. At midnight on a certain date the slaves agreed to rise up, slit the throats of their masters and the masters’ sons, capture the women (to be ravished later), plunder the farms, and escape to the French and Indians. A slave let word of the plot slip during an argument with a white man, the authorities were alerted, and after an investigation 30 ringleaders were arrested. Because the plot had not actually gone into effect, only one man was hanged; the rest were sentenced to be flogged or had their ears cut off.

Gov. Livingston of New Jersey planned to urge his legislature in 1778 to provide gradual abolition, but the assembly persuaded him to withdraw the message because the country was in “too critical a situation to enter on the consideration of it at that time.” But unlike many other Northern states, abolition was opposed strongly, often with racist arguments that would later be remembered only when used in the American South. Africans were unfit for freedom by their “deep wrought disposition to indolence” and “want of judgment.”

New Jersey’s slave population, unlike that of other colonies, actually increased during the Revolution, mainly through migration from other states. But the white population increased at a much faster rate, and wages for laborers became affordable to employers, while the cost of feeding and maintaining and guarding slaves remained high. By 1786, when a ban on slave importation into New Jersey took effect, the institution was dying an economic death. The 1800 census counted 12,422 New Jersey slaves, but the white population had boomed from 1786 to 1800, increasing at a rate six times that of blacks. This is not surprising, in part because in the same year New Jersey banned importing of slaves it also forbid free blacks from entering the state with intent to settle there.

The New Jersey Society for Promoting the Abolition of Slavery kept up agitation on this issue through the late 1780s, petitioning, distributing literature, and sponsoring lectures. But New Jersey came late and notoriously unwillingly to abolition.

In 1804 the New Jersey Legislature passed “An Act for the Gradual Abolition of Slavery.” It provided that females born of slave parents after July 4, 1804, would be free upon reaching 21 years of age, and males upon reaching 25. Like New York’s, this law held a hidden subsidy for slaveowners. A provision allowed them to free their slave children, who would then be turned over to the care of the local overseers of the poor (the state’s social welfare agency in those days). The bill provided $3 a month for the support of such children. A slaveowner could then agree to have the children “placed” in his household and collect the $3 monthly subsidy on them. The evidence suggests this practice was widespread, and the line item for “abandoned blacks” rose to be 40 percent of the New Jersey budget by 1809. It was a tax on the entire state paid into the pockets of a few to maintain what were still, essentially, slaves.

Furthermore, New Jersey slaveowners had the option to sell their human property into states that still allowed slaveholding, or into long indentures in Pennsylvania, until an 1818 law that forbid “the exportation of slaves or servants of color.”

New Jersey, like other northern states, replaced outright slavery with stricter controls of free blacks. Black voters were disenfranchsed by an 1807 state law that limited the franchise to “free, white male” citizens.

In 1830, of the 3,568 Northern blacks who remained slaves, more than two-thirds were in New Jersey. The institution was rapidly declining in the 1830s, but not until 1846 was slavery permanently abolished. At the start of the Civil War, New Jersey citizens owned 18 “apprentices for life” (the federal census listed them as “slaves”) — legal slaves by any name.

“New Jersey’s emancipation law carefully protected existing property rights. No one lost a single slave, and the right to the services of young Negroes was fully protected. Moreover, the courts ruled that the right was a ‘species of property,’ transferable ‘from one citizen to another like other personal property.’ ”