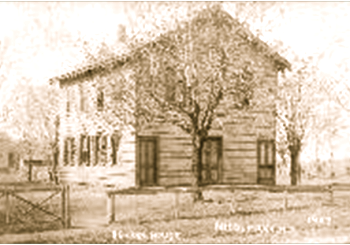 This was at least fifth schoolhouse (school house)that was located in Middlebush, since the 1700s. This building was built in 1859 and stood in back of the Reformed Church. Originally, the second floor was used for Sunday School and prayer meetings. ….

This photo was taken shortly before the Middlebush Train Station was torn down in 1948. The 12-foot-by-24-foot structure was the last of the four Millstone and New Brunswick stations in Franklin to be demolished.

Middlebush Schoolhouse (School House) No. 5 was built in 1859. The school stood originally behind the Middlebush Reformed Church. The second floor was used for Sunday School and prayer meetings. In 1907, as the number of students increased, the four ….

Before the Middlebush Reformed Church was completed in 1835, residents worshipped in Millstone, Six Mile Run (Franklin Park) and New Brunswick. This building (which stood at the corner of Amwell and South Middlebush Roads) was struck by lightning on ….

Smith’s Store was one of the classic ‘General Stores’, which got their name from ‘General Merchandise’ they sold. They were often the center of a village and usually contained the local post office (this was the case in Middlebush, Franklin Park, ….

The Franklin African Methodist Episcopal (A.M.E) Church of South Middlebush was founded in 1877. The church was erected on a hillside near Six Mile Run. The church later changed its name to True Temple Emmanuel in 1972. This church building was torn ….

Front of an 1863 advertisment from Barnum’s Museum in New York, featuring a drawing of the Routh/Ruth Goshen/Goshon, a.k.a. ‘The Arabian Giant’, a.k.a. ‘The Middlebush Giant,’