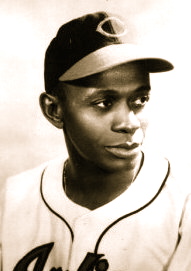 A short 4 minute video that documents pitching great Satchel Paige. It has footage from both his Hall of Fame speech and of him warming up for his 1965 start with the Kansas City Athletics. 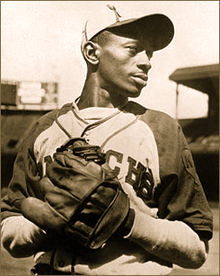 Leroy Robert “Satchel” Paige (July 7, 1906 – June 8, 1982) was an American Negro league baseball and Major League Baseball (MLB) pitcher who became a legend in his own lifetime by attracting record crowds wherever he pitched.

Paige was a right-handed pitcher, and at age 42 in 1948, he was the oldest major league rookie while playing for the Cleveland Indians. He played with the St. Louis Browns until age 47, and represented them in the All-Star Game in 1952 and 1953. He was the first player who had played in the Negro leagues to pitch in the World Series, in 1948, and was the first electee of the Committee on Negro Baseball Leagues to be inducted in the National Baseball Hall of Fame, in 1971.

Paige first played for the semi-professional Mobile Tigers from 1924 to 1926. He began his professional baseball career in 1926 with the Chattanooga Black Lookouts of the Negro Southern League and became one of the most famous and successful players from the Negro leagues. While his outstanding control as a pitcher first got him noticed, it was his infectious, cocky, enthusiastic personality and his love for the game that made him a star. On town tours across the United States, Paige would have his infielders sit down behind him and then routinely strike out the side. He played his last professional game on June 21, 1966, for the Peninsula Grays of the Carolina League. 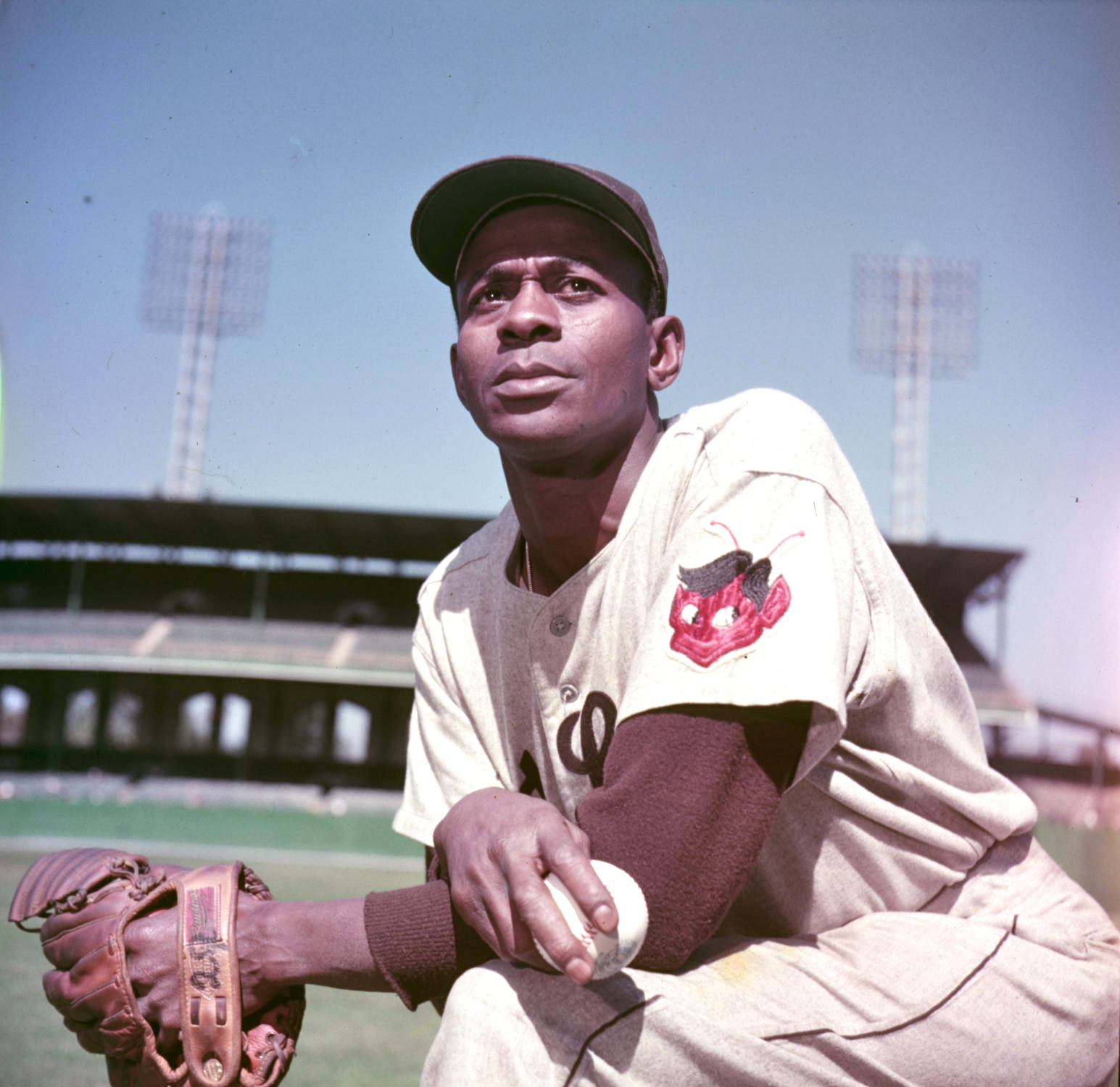 A former friend from the Mobile slums, Alex Herman, was the player/manager for the Chattanooga White Sox of the minor Negro Southern League. In 1926 he discovered Paige and offered to pay him $250 per month, of which Paige would collect $50 with the rest going to his mother. He also agreed to pay Lula Paige a $200 advance, and she agreed to the contract.

The local newspapers—the Chattanooga News and Chattanooga Times—recognized from the beginning that Paige was special. In April 1926, shortly after his arrival, he recorded nine strikeouts over six innings against the Atlanta Black Crackers. Part way through the 1927 season, Paige’s contract was sold to the Birmingham Black Barons of the major Negro National League (NNL). According to Paige’s first memoir, his contract was for $450 per month, but in his second he said it was for $275.

Pitching for the Black Barons, Paige threw hard but was wild and awkward. In his first big game in late June 1927, against the St. Louis Stars, Paige incited a brawl when his fastball hit the hand of St. Louis catcher Mitchell Murray. Murray then charged the mound and Paige raced for the dugout, but Murray flung his bat and struck Paige above the hip. The police were summoned, and the headline of the Birmingham Reporter proclaimed a “Near Riot.” Paige improved and matured as a pitcher with help from his teammates, Sam Streeter and Harry Salmon, and his manager, Bill Gatewood. He finished the 1927 season 7–1 with 69 strikeouts and 26 walks in 891⁄3 innings. 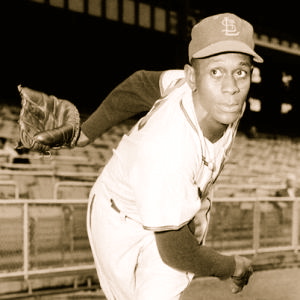 Over the next two seasons, Paige went 12–5 and 10–9 while recording 176 strikeouts in 1929. (Several sources credit his 1929 strikeout total as the all-time single-season record for the Negro leagues, though there is variation among the sources about the exact number of strikeouts. On April 29 of that season he recorded 17 strikeouts in a game against the Cuban Stars, which exceeded what was then the major league record of 16 held by Noodles Hahn and Rube Waddell. Six days later he struck out 18 Nashville Elite Giants, a number that was tied in the white majors by Bob Feller in 1938.  Due to his increased earning potential, Barons owner R. T. Jackson would “rent” Paige out to other ball clubs for a game or two to draw a decent crowd, with both Jackson and Paige taking a cut.

Abel Linares offered Paige $100 per game to play winter ball for the Santa Clara team in the Cuban League. Gambling on baseball games in Cuba was such a huge pastime that players were not allowed to drink alcohol, so they could stay ready to play. Paige—homesick for carousing, hating the food, despising the constant inspections and being thoroughly baffled by the language—went 6–5 in Cuba. He left Cuba abruptly before the end of the season, with several stories told about the circumstances. Paige told one version in which the mayor of a small hamlet asked him, in Spanish, if he had intentionally lost a particular game. Paige, not understanding a word the man said, nodded and smiled, thinking the man was fawning over him, and then had to flee from the furious mayor. Another version, also told by Paige, says that when he called on an attractive local girl at her home, she and her family interpreted his attentions as an official engagement and sent the police to enforce it, leading Paige to flee the island with police in pursuit. A third version, told by the general manager of the Santa Clara Leopards, says that he left Cuba in haste after legal charges were brought against him regarding an amorous incident with “a young lady from the provincial mulatto bourgeoisie.”

When Paige returned to the United States, he and Jackson revived their practice of renting him out to various teams. In the spring of 1930, Jackson leased him to the Baltimore Black Sox, who had won the 1929 American Negro League championship led by their bowlegged third baseman Jud “Boojum” Wilson. Paige, as a Southerner, found that he was an outsider on the Black Sox, and his teammates considered him a hick. Moreover, he was the team’s number two pitcher behind Lamon Yokely, and Paige did not like being overshadowed. 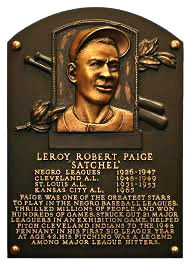 In mid-summer Paige returned to Birmingham, where he pitched well the rest of the summer, going 7–4. In September he was leased to the Chicago American Giants of the NNL for a home-and-home series with the Houston Black Buffaloes of the Texas–Oklahoma League. Paige won one and lost one in the series and then returned to Birmingham.

By the spring of 1931, the Depression was taking its toll on the Negro leagues, and the Black Barons had temporarily disbanded. Few teams could afford Paige, but Tom Wilson, who was moving the Nashville Elite Giants to Cleveland as the Cleveland Cubs, thought he could. Playing in the same city as a white major league team, Paige recalled, “I’d look over at the Cleveland Indians’ stadium, called League Park … All season long it burned me, playing there in the shadow of that stadium. It didn’t hurt my pitching, but it sure didn’t do me any good.”