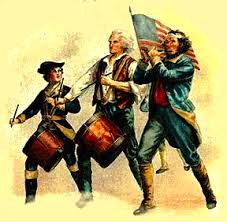 Did you know that Paul Revere didn’t ride alone, and there were women on the Revolutionary War battlefields? Find out more about the war’s lesser-known patriots. 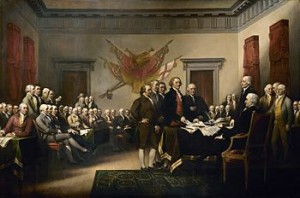 The American Revolution was a political upheaval during the last half of the 18th century in which thirteen colonies in North America joined together to break from the British Empire, combining to become the United States of America. They first rejected the authority of the Parliament of Great Britain to govern them from overseas without representation, and then expelled all royal officials. By 1775 each colony had established a Provincial Congress or an equivalent governmental institution to govern itself, but still recognized the British Crown and their inclusion in the empire. The British responded by sending combat troops to re-establish royalist control. Through the Second Continental Congress, the Americans then managed the armed conflict in response to the British known as the American Revolutionary War (also: American War of Independence, 1775–83). 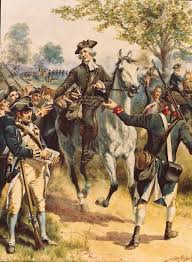 The British sent invasion armies and used their powerful navy to blockade the coast. George Washington became the American commander, working with Congress and the states to raise armies and neutralize the influence of Loyalists. Claiming the rule of George III of Great Britain was tyrannical and therefore illegitimate, Congress declared independence as a new nation in July 1776, when Thomas Jefferson wrote and the Congress unanimously approved the United States Declaration of Independence. The British lost Boston in 1776, but then captured and held New York City. The British would capture the revolutionary capital at Philadelphia in 1777, but Congress escaped, and the British withdrew a few months later.

After a British army was captured by the American army at Saratoga, the French balanced naval power by entering the war in 1778 as allies of the United States. The British offered the Americans colonial self-government including freedom from taxation for revenue, but after years of war the Congress was committed to sovereignty and independence. A combined American–French force captured a second British army at Yorktown in 1781, effectively ending the war in the United States. A peace treaty in 1783 confirmed the new nation’s complete separation from the British Empire, and resulted in the United States taking possession of nearly all the territory east of the Mississippi River.

The American Revolution was the result of a series of social, political, and intellectual transformations in American society, government and ways of thinking. Americans rejected the aristocracies that dominated Europe at the time, championing instead the development of republicanism based on the Enlightenment understanding of liberalism, abandoning the concept of royal rule by divine right. Among the significant results of the revolution was the creation of a democratically-elected representative government responsible to the will of the people. However, sharp political debates erupted over the appropriate level of democracy desirable in the new government, with a number of Founders fearing mob rule. 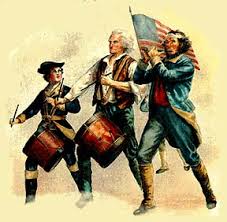 Fundamental issues of national governance were settled with the ratification of the United States Constitution in 1788, which replaced the weaker Articles of Confederation and Perpetual Union. In contrast to the loose confederation, the Constitution established a relatively stronger federal national government that included an executive, national courts, and powers of taxation. The United States Bill of Rights of 1791 comprised the first ten amendments to the Constitution, guaranteeing many “natural rights” that were influential in justifying the revolution, and attempted to balance a strong national government with strong state governments and broad personal liberties. The American shift to liberal republicanism, and the gradually increasing democracy, caused an upheaval of traditional social hierarchy and gave birth to the ethic that has formed a core of political values in the United States. 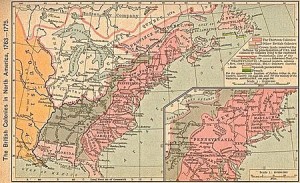 Before the Revolution: The Thirteen Colonies are in pink.

The American Revolution was predicated by a number of ideas and events that, combined, led to a political and social separation of colonial possessions from the home nation and a coalescing of those former individual colonies into an independent nation. 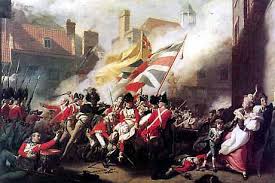 The American revolutionary era began in 1763, after a series of victories by British forces at the conclusion of the French and Indian War ended the French military threat to British North American colonies. Adopting the policy that the colonies should contribute more to maintain the territories as part of the Empire, Britain imposed a series of direct taxes (later known as the “Stamp Act“). Americans protested vehemently at the idea that the Parliament in London could pass laws upon them, such as levying taxes, without any of their own elected representatives in the government. When tea was taxed, Bostonians dumped it, leading to harsh reprisals known as the Intolerable Acts intended to demonstrate Parliament’s supremacy. Benjamin Franklin, appearing before the British Parliament testified “The Colonies raised, clothed, and paid, during the last war, near twenty-five thousand men, and spent many millions.”

Because the colonies lacked elected representation in the governing British Parliament, many colonists considered the new laws to be illegitimate and a violation of their rights as Englishmen. The opinion of the British Government, which was not unanimous, was that the colonies enjoyed “virtual representation.”

In 1772, groups of colonists began to create Committees of Correspondence, which would lead to their own Provincial Congresses in most of the colonies. In the course of two years, the Provincial Congresses or their equivalents rejected the Parliament and effectively replaced the British ruling apparatus in the former colonies, culminating in 1774 with the coordinating First Continental Congress.  In response to protests in Boston over Parliament’s attempts to assert authority, the British sent combat troops, shut down local government, and imposed direct rule by the army. 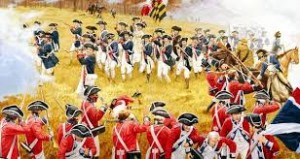 Consequently, the Colonies mobilized their militias, and fighting broke out in 1775. The Patriots quickly expelled royal officials from the colonies and took control. First ostensibly loyal to King George III and desiring to govern themselves while remaining in the empire, the repeated pleas by the First Continental Congress for royal intervention on their behalf with Parliament resulted in the declaration by the King that the states were “in rebellion”, and the members of Congress were traitors.

In July 1776, the Second Continental Congress unanimously adopted a Declaration of Independence, which now rejected the British monarchy in addition to its Parliament, and established the sovereignty of the new nation external to the British Empire. The Declaration established the United States, which was originally governed as a loose confederation with a weak central government. (See Second Continental Congress and Congress of the Confederation.) 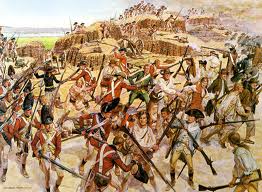