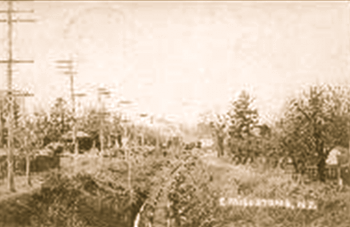 This photo was taken from a vantage point on the tracks about mid-way between Franklin Street and Wortman Avenue in East Millstone, looking west (c. 1909). Note the hay press (middle left) and the railroad’s engine house and depot (center ….

Joseph H. Olcott started a distillery in East Millstone in the 1850s. The business would later be run by the Fleischmanns. Olcott’s house, built by 1860, still stands at the corner of Franklin Street and Amwell Road. It is a fine example of ….

Millstone and New Brunswick Railroad ‘cut’ outside of East Millstone.

Charles Van Nostrand’s Stanley Steamer was the first automobile in East Millstone. His passenger in this photo is George Pace. Pace was a lawyer who served in the New Jersey Assembly and owned Pace’s Hotel. Pace lost his East Millstone house, hotel ….