Introduction To Protestantism in Korea

Thanks to Gerald Halim and Isaac Lee…You guys are awesome. This is the longest video we made for a class presentation. “INTRODUCTION OF PROTESTANTISM IN KOREA”, script was taken from the book, “Christ and Caesar in Modern Korea” by Wi Jo Kang presented in Korean Church History Class at Torch Trinity Graduate School of Theology, Seoul, Korea, copyright fall semester, 2010.

A gathering of Raëlians in South Korea

Raëlism (also Raelianism or the Raëlian Movement) is a UFO religion that was founded in 1974 by Claude Vorilhon, now known as Raël. It is numerically the world’s largest UFO religion.  An adherent of Raëlism is a Raëlian.

The Raëlian Movement teaches that life on Earth was scientifically created by a species of extraterrestrials, which they call the Elohim. Members of this species appeared human and when having personal contacts with the descendants of the humans they made, they previously misinformed (on purpose) early humanity that they were angels, cherubim or gods. Raëlians believe messengers, or prophets, of the Elohim include Buddha, Jesus, and others who informed humans of each era.  The founder of Raëlism, members claim, received the final message of the Elohim and that its purpose is to inform the world about Elohim and that if humans become aware and peaceful enough, they wish to be welcomed by them. 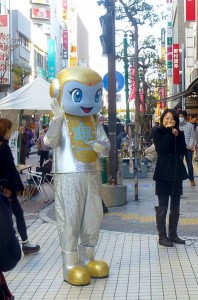 The Raëlian Church has a quasi-clerical structure of seven levels. Joining the movement requires an official apostasy from other religions.

Raelian ethics include striving for world peace, sharing, democracy and nonviolence.  Sexuality is also an important part of the Raëlian doctrine. The Raëlian Church has attracted some of its priests and bishops from other religions despite having liberal views of sexuality.

Raël founded Clonaid (originally Valiant Venture Ltd Corporation) in 1997, but then handed it over to a Raëlian bishop, Brigitte Boisselier in 2000.  In 2002 the company claimed that an American woman underwent a standard cloning procedure that led to the birth of a daughter, Eve (b. 26 December 2002). Although few believe the claim, it nonetheless attracted national authorities and the mainstream media to look further into the Raëlians’ cult status.

The Raëlians frequently use the swastika as a symbol of peace, which halted Raëlian requests for territory in Israel, and later Lebanon, for establishing an embassy for extraterrestrials. The religion also uses the swastika embedded on the Star of David. Starting around 1991, this symbol was often replaced by a variant star and swirl symbol as a public relations move, particularly toward Israel.

The beginnings of Raëlism are rooted in the claims of a French former automobile journalist and race car driver Claude Vorilhon. In his books The Book Which Tells the Truth (1974) and Extraterrestrials Took Me to their Planet (1975), Vorilhon alleges that he had alien encounters with beings who gave him knowledge of the origins of all major religions.

The movement traces its beginnings to a conference in Paris, France of two thousand people in 1974.  From there, the MADECH organization was born.  The name MADECH is a double acronym in the French language. The first stands for “Movement for the welcoming of the Elohim, creators of humanity”(Mouvement pour l‘accueil des Elohim, créateurs de l’humanité) while the second stands for “Moses preceded Elijah and the Christ” (Moise a devancé Élie et le Christ). By 1976, Raël transformed MADECH into the International Raelian Movement.

From 1980 to 1992 Raël and his movement became increasingly global. In 1980 Claude Raël’s fifth Raëlian book Sensual Meditation was published and formal publication of the Raëlian Messages in the Japanese language began as part of the Raëlian mission to Japan.  Two years later, Africa became another target area in the mission to spread the Raëlian messages.

On 26 December 2002, Brigitte Boisselier, a Raëlian Bishop and CEO of a biotechnology company called Clonaid announced the birth of baby Eve, supposedly the first-ever human clone. The announcement ignited much media attention, ethical debate, doubt, criticism, and claims of a hoax. Spokespeople for the movement, including Claude Vorilhon, have suggested that this is one of the first steps in achieving a more important agenda. They claim that through cloning they can combine an accelerated growth process with some form of mind transfer, and in such, may achieve eternal life.

The structure of the Raëlian Church is hierarchical, with seven levels ascending from level 0 to level 6.  The top four levels consist of “Guides”. The level 6 guide, known as the “Guide of Guides,” has the final say on who becomes a level 5 “Bishop Guide” or a level 4 “Priest Guide.”  Bishops and priests promote lower-level members one level at a time during annual seminars. Each bishop or priest can propose a new guide as long as the candidate is from a level below his or her own. Guides can assist “Regional Guides”—level 3 and above —in their assigning of non-guide members to levels 3 (“Assistant Priests”), 2 (“Organizers”) and 1 (“Assistant Organizers”).

Members of the Raëlian structure begin as level 0 “trainees” during annual seminars. The Raelian structure claimed in 2007 to have about 2,300 members, 170 “Raëlian guides,” and 41 bishops.  Claude Vorilhon has held the highest position for three seven-year terms.

The Order of Angels, founded in the 1990s, consists of over a hundred Raëlian women who call for femininity and refinement for all of humanity.  The initiation rites include declaring an oath or making a contract in which one agrees to become defender of the Raëlian ideology and its founder Raël.  The Order of Angels has its own hierarchy of “rose angels” and “white angels” which, as of 2003, are six and 160 women, respectively. After the Clonaid human cloning claim made the headlines, the Daily Telegraph wrote that members of the order not only provided sexual pleasure for Raël, but also helped donate eggs for efforts towards human cloning.  A few days later, Time magazine wrote that French chemist Brigitte Boisselier was an Order of Angels member.  Around this time, cult specialist Mike Kropveld called the Order of Angels “one of the most transparent movements” he had witnessed, though he was alarmed by the women’s promise to defend Raël’s life with their own bodies.

Raël has instructed some women members to play a pro-sex feminist role in the Raëlian Church. “Rael’s Girls” is another group of women in the movement which are against the suppression of feminine acts of pleasure, including sexual intercourse with men or women. Rael’s Girls solely consists of women who work in the sex industry.  In contrast to the teachings of the world’s major religions, the women of Rael’s Girls say there is no reason to repent for performing striptease or being a prostitute.  This organization was set up to counteract the influence of the “JC’s girls” mission of the Christian ex-stripper Heather Veitch.  Rael’s Girls and its founder Raël were featured in a pictorial in the October 2004 issue of Playboy.