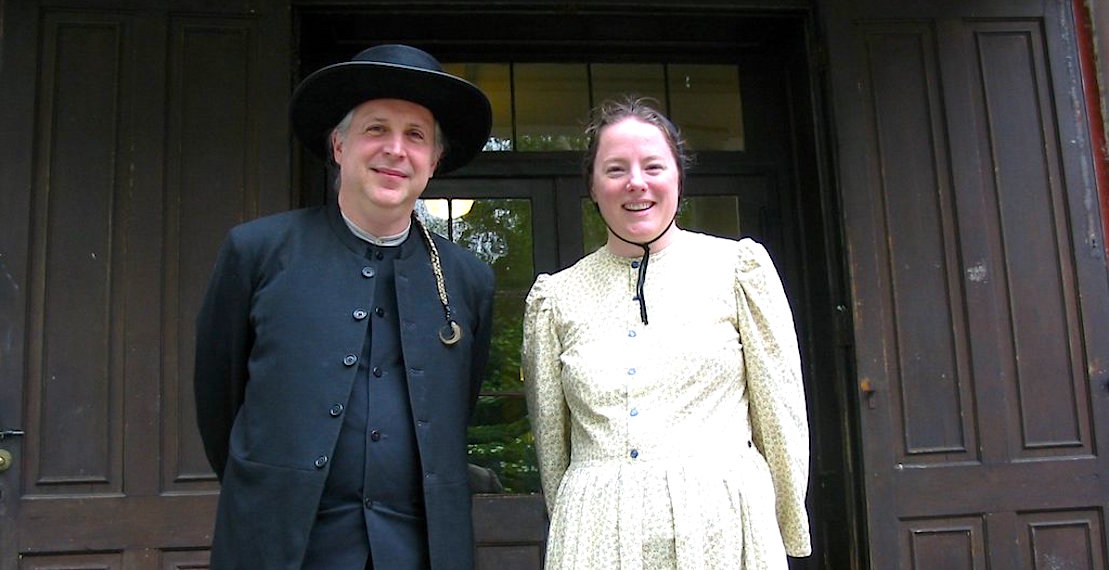 This week’s Quaker video: “You’re a Quaker? You mean, like, Amish?” It’s something all Quakers have heard. Max Carter, professor of Quaker religion studies at Guilford College, tells us about the differences between Quakers and the Amish. 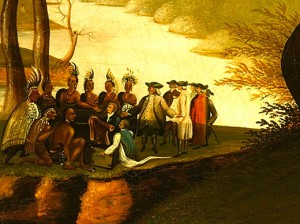 Quakers in North America constitute approximately 32% of Quakers worldwide, according to the online Quaker Information Center. There are about 108,500 individual Quakers and about 44 Friends Yearly Meetings in North America.

Quakers are members of the Religious Society of Friends, a movement that started in England in the 17th Century. Some Quakers came to North America in the early days because they wanted to spread their beliefs to the British colonists there, while others came to escape the persecution that they were experiencing in Europe. The first known Quakers in North America were missionaries who arrived there in 1656. Soon other Quaker preachers arrived, many colonists converted to Quakerism, and Quakers from Europe migrated there. The colony of Rhode Island, with its policy of religious freedom, was a frequent destination, as the Friends were persecuted by law in Massachusetts until 1681. The British colony of Pennsylvania was formed by William Penn in 1681 as a haven for persecuted Quakers. Quakers also spread into Mexico and Central America. Also known as Mexican Quakers.

The arrival of the Quakers

Mary Fisher and Ann Austin are the first known Quakers to set foot in the New World. They journeyed from England to Barbados in 1656 and then went on to the Massachusetts Bay Colony. Their purpose was to spread the beliefs of the Friends among the colonists.

In Puritan-run Massachusetts the women were persecuted. They were imprisoned and their books were burned. Only one man, Nicholas Upsall, was kind to them during their imprisonment. Nicholas became a Friend himself and began spreading Friends beliefs in Massachusetts. Due to the intolerance of the Puritans, the Quakers eventually left the Massachusetts bay colonies and migrated to the more tolerant colonies in Rhode Island. 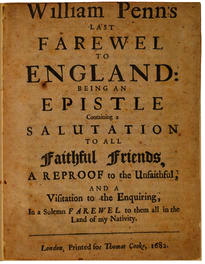 Nicholas Upsall was banished from Boston and took refuge in the town of Sandwich, Massachusetts. It was there that he helped to found the first Monthly Meeting of Friends in the United States. It began meeting in 1657 at the home of William and Priscilla Allen. Besides the Allens and Upsall those in attendance included Richard Kerbey and Elizabeth Newland.

Quakers in New Jersey and Pennsylvania

The first Friends who settled along the Delaware River were John Fenwick, Edward Wade, John Wade, and Richard Noble. They formed a settlement at Salem, New Jersey in 1675.

In 1681 King Charles II granted William Penn, a Quaker, a charter for the area that was to become Pennsylvania. Penn guaranteed the settlers of his colony freedom of religion. He advertised the policy across Europe so that Quakers and other religious dissidents would know that they could live there safely. On November 10, 1681, Robert Wade established the first Monthly Meeting in the colony at his home. It eventually became the Chester Monthly Meeting.

Branches of Quakerism in North America 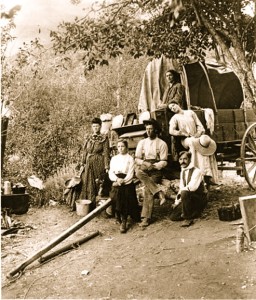 Quakers in the United States are diverse in their beliefs and practices. Friends there have split into various groups because of disagreements throughout the years.

Liberal Friends emphasize the Inner Light as a source of inspiration and guidance. They practice unprogrammed (i.e., spontaneous, Spirit-led) worship. They have no ordained clergy. Among them are both Christians and universalists. Many liberal Friends groups are part of the Friends General Conference. Some of them are part of both the Friends General Conference and the Friends United Meeting. Others are independent or not affiliated with any larger group. They are very involved in service projects but not in evangelism. They are widespread throughout Canada and the United States but are concentrated in Pennsylvania, New York, and New Jersey.

Pastoral Friends emphasize the Bible as a source inspiration and guidance. They practice programmed (i.e., planned) worship led by ordained clergy. Most pastoral Friends groups are part of the Friends United Meeting. They conduct both service projects and evangelism. They are found primarily in Indiana, North Carolina, Iowa, and Ohio.

Conservative Friends are a small group that emphasize both the Inner Light and the Bible as sources of inspiration and guidance. They practice unprogrammed worship. Many of them adhere to the traditional standards of “plainness” in speech and dress (see Testimony of Simplicity). Their meetings are not part of any larger groups. They are found primarily in Iowa, Ohio, and North Carolina.

Evangelical Friends strongly emphasize the Bible as a source of inspiration and guidance, considering the ultimate authority for faith and practice. They practice planned worship led by ordained clergy. Their congregations are often called churches instead of meetings, and they are usually part of Evangelical Friends International. They are very active in evangelism and missionary outreach as well as service projects. They are found throughout the United States and Latin America but are concentrated in Guatemala, Panama, Ohio, California, Oregon, and Kansas. 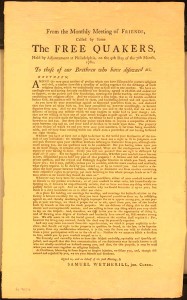 Trouble for Quakers in Colonial America – Persecution and Martyrdom

Quakers, in their zest for proselyting, experienced quite a bit of persecution, and even martyrdom. Eventually, the idea of martyrdom became something that a Quaker would search for. “The quakers engaged in a relentless quest for martyrdom… In colonial Rhode Island, where the rulers refused to persecute them, Quakers were unwilling to stay.” While many Quakers did remain in both New England and Rhode Island, many of them migrated to cities or areas where they would be put through a “test of fire.” Boorstin expounds that “One after another of them seemed to lust after hardships, trudging thousands of wilderness miles, risking Indians and wild animals, to find a crown of martyrdom.” The Quakers wanted to preach not to spread their faith, but to become martyrs and thus, become more personally “pure.” 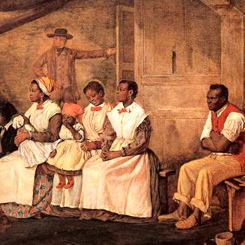 Christopher Holder is the perfect exemplar of a Quaker martyr. Searching for this trial by fire, Holder turned to Boston, MA to preach his faith. Puritans at the time, who had a large community in Boston, were becoming fed up with Quakers interfering in their lives. Boorstin again explains that “Puritans were not sadists, but they wanted to be alone to pursue their orthodoxy and to build Zion according their model. What right had the Quakers to interfere? The Puritans had not sought the Quakers in order to punish them; the Quakers had come in quest of punishment.” What the Puritans didn’t understand, sadly, was that when they increased the legal penalties against the Quakers, it made their colony that much more enticing to the them, drawing even more Quakers. Christopher Holder was part of the group being “drawn” to Boston.

After being expelled from their community multiple times, the community in Boston realized expelling Holder wasn’t keeping him away. They decided to capture and punish him and his traveling companion. He was confined to a bare cell with no bedding, no food, and no water for 3 days. He was imprisoned for 9 weeks during a New England winter without fire. He was whipped twice a week with a three-cord knotted whip. When they finally let him go, he traveled to Barbados, but because he did not receive enough persecution there, he returned back to Boston, where the Puritans cut off his ear in one last “lesson.” 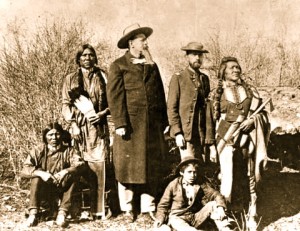 Another epic example of Quaker martyrs was that of Mary Dyer. She left her husband in Newport to travel to Boston in 1659. She and her companions (which included an 11 year old girl) were banished on pain of death while in Boston. Not dismayed, she returned and the governor announced their death sentence. On the day of her execution, they walked her to the gallows where she stood and watched two of her companions meet their fate. Just as she was leaning upon her own gallow, the governor recanted her sentence. The governor didn’t really want to kill her. He just wanted her to think she was about to be sentenced so that she would be scared to come back. Yet, she wasn’t fazed. She requested that either the law was changed involving Quakers, or that she received her sentence. The governor had to send her off on horseback to her home. She was still unsatisfied and eventually she came back once more and requested that justice was met. She either had to have her sentence or they had to change the law. She was hanged.