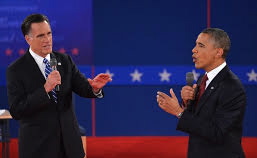 The second presidential town hall debate between Mitt Romney and Barack Obama in the run up to the general election in November.

With the first presidential debate that was set for on Wednesday, Oct. 3, President Barack Obama’s team used a Sunday interview to suggest that Republican challenger Mitt Romney has the advantage, while Romney told reporters the debates mean the president will no longer be able to “fool people.”

In a break with tradition, the Commission on Presidential Debates released the topics for the first debate, warning that they were subject to change due to news developments. The six topics include three 15-minute sections on the economy, as well as sections on health care, the role of government and governing.