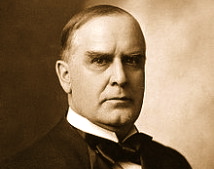 A Minute in Commissary History: Narrated by DeCA Historian Dr. Peter Skirbunt, this video, “Bill McKinley and the Battle of Antietam,” relates how the commissary sergeant of the 23rd Ohio Volunteer Infantry risked his life to bring a hot meal to the men of his regiment during the Battle of Antietam, the bloodiest single day of the American Civil War. It concludes with some interesting facts about what happened to McKinley and his regimental commander after the war. This video is the 10th in a series of “A Minute of History” videos produced by the Defense Commissary. 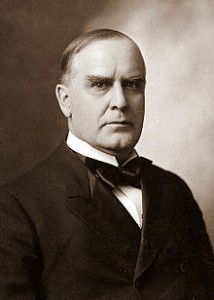 He was the 25th President of the United States, serving from March 4, 1897 until his assassination in September 1901. McKinley led the nation to victory in the Spanish–American War, raised protective tariffs to promote American industry, and maintained the nation on the gold standard in a rejection of inflationary proposals. Though McKinley’s administration ended with his assassination, his presidency marked the beginning of a period of dominance by the Republican Party that lasted for more than a third of a century.

McKinley was the last President to have served in the Union Army during the American Civil War, beginning as a private and ending as a brevet major. After the war, he settled in Canton, Ohio, where he practiced law and married Ida Saxton. In 1876, he was elected to Congress, where he became the Republican Party’s expert on the protective tariff, which he promised would bring prosperity. His 1890 McKinley Tariff was highly controversial; which together with a Democratic redistricting aimed at gerrymanderinghim out of office, led to his defeat in the Democratic landslide of 1890. He was elected Ohio’s governor in 1891 and 1893, steering a moderate course between capital and labor interests. With the aid of his close adviser Mark Hanna, he secured the Republican nomination for president in 1896, amid a deep economic depression. He defeated his Democratic rival, William Jennings Bryan, after a front-porch campaign in which he advocated “sound money” (the gold standard unless altered by international agreement) and promised that high tariffs would restore prosperity.

Rapid economic growth marked McKinley’s presidency. He promoted the 1897 Dingley Tariff to protect manufacturers and factory workers from foreign competition, and in 1900, he secured the passage of the Gold Standard Act. McKinley hoped to persuade Spain to grant independence to rebellious Cuba without conflict, but when negotiation failed, he led the nation in the Spanish–American War of 1898; the U.S. victory was quick and decisive. As part of the peace settlement Spain turned over to the United States its main overseas colonies of Puerto Rico, Guam, and the Philippines; Cuba was promised independence but at that time remained under the control of the U.S. Army. The United States annexed the independent Republic of Hawaii in 1898 and it became a U.S. territory.

McKinley defeated Bryan again in the 1900 presidential election, in a campaign focused on imperialism, prosperity, and free silver. President McKinley was assassinated by an anarchist in September 1901, and was succeeded by Vice President Theodore Roosevelt. Historians regard McKinley’s 1896 victory as a realigning election, in which the political stalemate of the post-Civil War era gave way to the Republican-dominated Fourth Party System, which began with the Progressive Era. He is generally placed near the middle in rankings of American presidents. 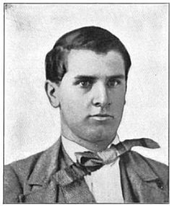 William McKinley, Jr., was born in 1843 in Niles, Ohio, the seventh child of William and Nancy (Allison) McKinley.  The McKinleys were of English and Scots-Irish descent and had settled in western Pennsylvania in the 18th century. There, the elder McKinley was born in Pine Township.   The family moved to Ohio when the senior McKinley was a boy, settling in New Lisbon (now Lisbon). He met Nancy Allison there in 1829, and married her the same year.  The Allison family was of mostly English blood and among Pennsylvania’s earliest settlers.   The family trade on both sides was iron-making, and McKinley senior operated foundries in New Lisbon, Niles, Poland, and finally Canton, Ohio.

The McKinley household was, like many from Ohio’s Western Reserve, steeped in Whiggish and abolitionist sentiment.  Religiously, the family was staunchly Methodist and young William followed in that tradition, becoming active in the local Methodist church at the age of sixteen.  He was a lifelong pious Methodist.  In 1852, the family moved from Niles to Poland so that their children could attend the better school there. Graduating in 1859, he enrolled the following year at Allegheny College in Meadville, Pennsylvania. He remained at Allegheny for only one year, returning home in 1860 after becoming ill and depressed.   Although his health recovered, family finances declined and McKinley was unable to return to Allegheny, first working as a postal clerk and later taking a job teaching at a school near Poland. 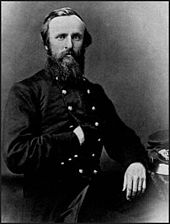 Rutherford B. Hayes was McKinley’s mentor during the Civil War and afterward.

When the southern states seceded from the Union and the American Civil War began, thousands of men in Ohio volunteered for service.   Among them were McKinley and his cousin, William McKinley Osbourne, who enlisted as privates in the newly formed Poland Guards in July 1861.  The men left for Columbus where they were consolidated with other small units to form the 23rd Ohio Infantry.   The men were unhappy to learn that, unlike Ohio’s earlier volunteer regiments, they would not be permitted to elect their officers; they would be designated by Ohio’s governor, William Dennison. Dennison appointed Colonel William Rosecrans as the commander of the regiment, and the men began training on the outskirts of Columbus.   McKinley quickly took to the soldier’s life and wrote a series of letters to his hometown newspaper extolling the army and the Union cause.   Delays in issuance of uniforms and weapons again brought the men into conflict with their officers, but Major Rutherford B. Hayes convinced them to accept what the government had issued them; his style in dealing with the men impressed McKinley, beginning an association and friendship that would last until Hayes’ death in 1893.

After a month of training, McKinley and the 23rd Ohio, now led by Colonel Eliakim P. Scammon, set out for western Virginia (today part of West Virginia) in June 1861 as a part of the Kanawha Division.   McKinley initially thought Scammon was a martinet, but when the regiment finally saw battle, he came to appreciate the value of their relentless drilling.   Their first contact with the enemy came in September when they drove back Confederate troops at Carnifex Ferry in present-day West Virginia.   Three days after the battle, McKinley was assigned to duty in the brigade quartermaster office, where he worked both to supply his regiment, and as a clerk.   In November, the regiment established winter quarters near Fayetteville (today in West Virginia).  McKinley spent the winter substituting for acommissary sergeant who was ill, and in April 1862 he was promoted to that rank.   The regiment resumed its advance that spring with Hayes in command (Scammon by then led the brigade) and fought several minor engagements against the rebel forces.

That September, McKinley’s regiment was called east to reinforce General John Pope‘s Army of Virginia at the Second Battle of Bull Run.  Delayed in passing through Washington, D.C., the 23rd Ohio did not arrive in time for the battle, but joined the Army of the Potomac as it hurried north to cut off Robert E. Lee‘s Army of Northern Virginia as it advanced into Maryland.   The 23rd was the first regiment to encounter the Confederates at the Battle of South Mountain on September 14.    After severe losses, Union forces drove back the Confederates and continued to Sharpsburg, Maryland, where they engaged Lee’s army at the Battle of Antietam, one of the bloodiest battles of the war.   The 23rd was also in the thick of the fighting at Antietam, and McKinley himself came under heavy fire when bringing rations to the men on the line.   McKinley’s regiment again suffered many casualties, but the Army of the Potomac was victorious and the Confederates retreated into Virginia.   The regiment was then detached from the Army of the Potomac and returned by train to western Virginia.