Mr. Speaker, Mr. Vice President, Members of Congress, my fellow Americans: Tonight marks the eighth year I’ve come here to report on the State of the Union. And for this final one, I’m going to try to make it shorter. I know some of you are antsy to get back to Iowa. 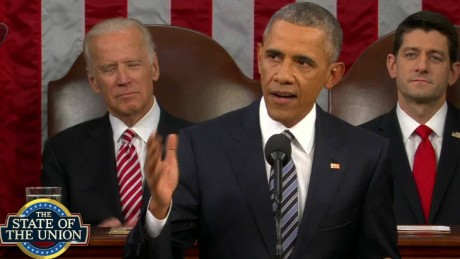 President Barack Obama delivered his final State of the Union address Tuesday, calling for “a better politics” that rejects discrimination and fear towards outsiders. At many times a direct rebuke to the rhetoric of GOP candidates – particularly Donald Trump – he urged lawmakers to find common ground and eschew partisanship for its own sake. And he outlined four “big questions” that must be addressed by Americans, dealing with the economy, technology, foreign policy and the coarseness of our politics.

He was on defense on foreign policy, calling Republicans’ strident threats of a growing ISIS overblown. Republican GOP candidates swiftly rebuked him for underestimating the threat of terrorism.

After the State of the Union, Republican Gov. Nikki Haley of South Carolina weighed in, delivering the Republican response. You can read a full recap of her comments here.