History of Medicine in Philadelphia

Pennsylvania Hospital (“Pennsy”) is a hospital in Center City, Philadelphia, affiliated with the University of Pennsylvania Health System (“Penn Health System”). Founded on May 11, 1751 by Benjamin Franklin and Thomas Bond, it was the first hospital in the United States.   It is also home to the first surgical amphitheatre and first medical library in America. 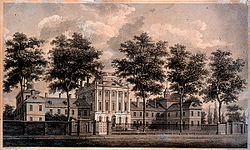 The Pennsylvania Hospital by William Strickland (1755)

The Hospital was originally conceived in 1751 by Dr. Thomas Bond as an institution “for the reception and cure of the sick poor… free of charge,” and was funded grace to donations of the people of Philadelphia.  On September 2, 1751, Mathias Koplin donated the first plot of ground for the new hospital.

In 1752, the first (temporary) building was opened on High (now Market) Street. Elizabeth Gardner (a Quaker widow) was appointed Matron.

In 1755, the cornerstone was laid for the East Wing of what would become the hospital’s permanent location at 8th and Pine Streets. Patients were first admitted to the permanent hospital in 1756. The site continued to grow through the years with the addition of more wings (such as the West Wing of the building which was built in 1796) and buildings, extra land and further expansion.

Pennsylvania Hospital gained a reputation as a center of innovation and medical advancement, particularly in the area of maternity. It was a teaching hospital from its very beginning, when Bond would lead rounds through what is now the east wing of the main building. In its early years it was also known for its particularly advanced and humane facilities for mentally ill patients (at a time when mental illness was very poorly understood and patients were often treated very badly). Care of the mentally ill was removed to West Philadelphia in 1841 with the construction of the Pennsylvania Hospital for the Insane, later known as The Institute of the Pennsylvania Hospital. Under superintendent Thomas Story Kirkbride, the hospital developed a treatment philosophy that became the standard for care of the mentally ill in the 19th century.

In 1950, Pennsylvania Hospital was recognized for becoming more highly specialized as it established, in addition to its sophisticated maternity programs, an intensive care unit for neurological patients, a coronary care unit, an orthopaedic institute, a diabetes center, a hospice, specialized units in oncology and urology and broadened surgical programs.

The seal of the hospital, chosen by Franklin and Bond, incorporates the story of the Good Samaritan; the phrase “Take Care of Him and I will repay Thee” is used on it.