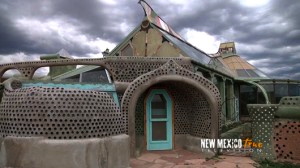 This episode tours North Central New Mexico’s many attractions, and not just the well-known ones. Georgia O’Keeffe painted at Ghost Ranch, but we’ll join in as Michael climbs, rides and ‘arrows’ his way around the spectacular scenery. And we’ll tag along as molten metal becomes art, as a river float becomes an adrenaline rush, and as one man’s trash becomes another man’s…home. That’s just part of the adventures that await you in the 27 minutes ahead, on New Mexico True Television. 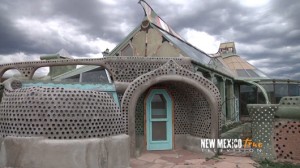 Hey there everybody! I hope you’ve been taking your New Mexico True Vacations by now. As always we want to inspire you to take the trips that you’ve thought about but never have. This week we went around the North Central region of the state. The landscapes of this area are where, I believe, the ‘Enchantment” of the Land of Enchantment come from.

We started out in Georgia O’Keeffe Country, out at Ghost Ranch in Abiquiu, NM. Being able to stand in the very place where Georgia used to step and paint these beyond beautiful landscapes was awe-inspiring. Not to mention, our whole day was filled with so many other spectacular outdoor activities. One of my highlights was being able to do the high ropes course at Ghost Ranch and learning the zen of rock climbing. A big surprise for the crew and I was me hitting the bulls eye zone on my first archery lesson. This has been something I’ve wanted to for a long time, so I had a lot of fun and found I developed a new hobby. So much so, that I almost ran the crew off schedule because I was shooting for probably another 30 minutes. It really was like a summer camp for kids, except with famously painting red cliffs in the background. 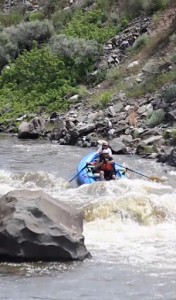 Another dream come true for me was being able to sleep in an Earthship! Me being a nerd for anything dealing with sustainability, I was ecstatic when I heard we would be able to make a stop in Taos at the Earthships, and even stay in one! For those who don’t know what an Earthship is, it a completely sustainable off the grid house, that is the epitome of efficient. If you’re not totally into that kind of stuff, it still is well worth checking out because of the truly unique lodging. The architecture designs look like they are straight from space its even more awesome because all the materials are made out of recycled goods (car tires, glass, and aluminum). One cool feature is that they have gardens established INSIDE the building, as part of the whole ecosystem that house is part of. In fact, the largest one that you can rent out has its own greenhouse with tropical plants and animals flourishing inside. The earthship movement has taken off all over the world, but it is so great to know that it started right here in Taos.

Another stop in Taos was going White Water Rafting on the Race Track course. My guide Cisco has been a legend around town for many years and made my ride down the Rio Grande exhilarating and enlightening. Being one with the sometimes-docile sometimes-violent element of water was a very grounding experience for me after being on the road for a while. It was also really cool capturing the float down the river from so many angles. Rafting is such a full body experience, so our crew wanted to really immerse the viewer into the action. We were able to take you with us on that natural rollercoaster by having cameras in every direction. It definitely took some work to capture nature at its finest! 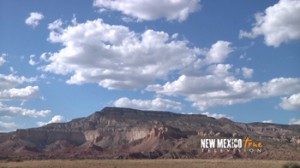 Hope we are sparking some ideas for you and your family! So what do you say? How about getting out of your comfort zone a little bit and exploring…? I promise it will be worth it!

As always thanks for reading we will see you next week! Much love, MN

I hope you enjoyed the episode and got inspired to go and do something new, maybe something that may have even scared you before.