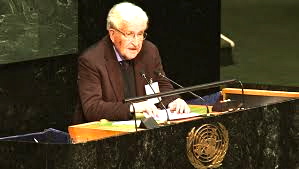 Noam Chomsky at United Nations: It Would Be Nice if the United States Lived up to International Law

After world-renowned scholar Noam Chomsky gave a major address on the Israeli-Palestinian conflict in the hall of the United Nations General Assembly last week, Amy Goodman interviewed the world-renowned linguist and dissident before an audience of 800 people. Chomsky spoke at an event sponsored by the United Nations Committee on the Exercise of the Inalienable Rights of the Palestinian People. “One important action that the United States could take is to live up to its own laws. Of course it would be nice if it lived up to international law, but maybe that’s too much to ask,” Chomsky said.

AMY GOODMAN: This is Democracy Now!, democracynow.org, The War and Peace Report. I’m Amy Goodman, as we return to MIT professor Noam Chomsky, world-renowned political dissident, linguist and author. Last week, he spoke before over 800 people in the hall of the United Nations General Assembly, before ambassadors and the public alike, on the issue of Israel and Palestine. After his speech, I conducted a public interview with Professor Chomsky.

AMY GOODMAN: What do you think is the most—the single most important action the United States can take? And what about its role over the years? What is its interest here?

NOAM CHOMSKY: Well, one important action that the United States could take is to live up to its own laws. Of course, it would be nice if it lived up to international law, but maybe that’s too much to ask, but live up to its own laws. And there are several. And here, incidentally, I have in mind advice to activists also, who I think ought to be organizing and educating in this direction. There are two crucial cases.
One of them is what’s called the Leahy Law. Patrick Leahy, Senator Leahy, introduced legislation called the Leahy Law, which bars sending weapons to any military units which are involved in consistent human rights violations. There isn’t the slightest doubt that the Israeli army is involved in massive human rights violations, which means that all dispatch of U.S. arms to Israel is in violation of U.S. law. I think that’s significant. The U.S. should be called upon by its own citizens to—and by others, to adhere to U.S. law, which also happens to conform to international law in this case, as Amnesty International, for example, for years has been calling for an arms embargo against Israel for this reason. These are all steps that can be taken. The second is the tax-exempt status that is given to organizations in the United States which are directly involved in the occupation and in significant attacks on human and civil rights within Israel itself, like the Jewish National Fund. Take a look at its charter with the state of Israel, which commits it to acting for the benefit of people of Jewish race, religion and origin within Israel.

One of the consequences of that is that by a complex array of laws and administrative practices, the fund pretty much administers about 90 percent of the land of the country, with real consequences for who can live places. They get tax-exempt status also for their activities in the West Bank, which are strictly criminal. I think that’s also straight in violation of U.S. law. Now, those are important things.

And I think the U.S. should be pressured, internationally and domestically, to abandon its virtually unique role—unilateral role in blocking a political settlement for the past 40 years, ever since the first veto in January 1976. That should be a major issue in the media, in convocations like this, in the United Nations, in domestic politics, in government politics and so on.