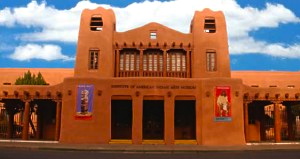 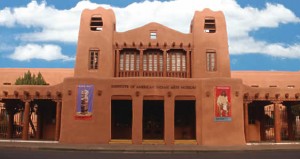 During IAIA’s first decade (1962-1971), the Institute collected artwork that was coming out of the newly developed program to document the achievements of its students and faculty.  These works were sent out as exhibits throughout the country as a way to promote the Institute’s mission.  By the 1970s the Institute recognized a need to create a museum studies training program as well as a museum to house the school collection that was being stored throughout its campus in various buildings.  The collection was inventoried and catalogued and regular collection exhibits were created for the public.  As the local community and visitors to the campus became aware of this collection, private collectors were inspired to make donations to the museum of cultural arts such as baskets, pottery and textiles. These works were utilized for study by the students to help reinforce the cultural aesthetics that inform contemporary Native American art. 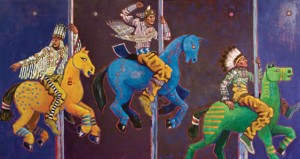 In the decade that followed, it became possible to observe the artistic or professional development of graduates who had attended the Institute in its seminal years.  Some of these artistic tracks include works from T.C. Cannon, Kevin Red Star, Bill Warsoldier Soza, Doug Hyde, Alfred Youngman, Earl Biss and Dan Namingha who were all enrolled at IAIA in the 1960s and 1970s.  Around this time, the Museum recognized the need to collect work by other renowned artists to further enhance the collection as a significant body of contemporary Native American artwork. 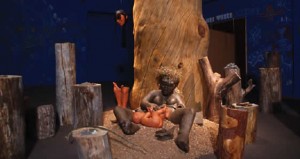 A turning point occurred in the 90’s when the governing board and the museum decided to assertively redefine the collection and its public face through the acquisition of the former Santa Fe federal building in downtown Santa Fe, providing a prominent and highly accessible venue. The renovated space allowed for expanded exhibits, programming and collections storage.  By this time its holdings included works by earlier artists from the 1930s-1950s such as Pop Chalee, Harrison Begay and Andrew Tsinahjinnie.  This comprehensive compilation of work could not compare to any other collection since other museum collections of Native American works were primarily based upon archaeological, regional or historic works.  It was decided by the school and museum that what they had was not only unique but incredibly important to the canons of art history and Native art history.  Therefore the collection from that point forward was called “The National Collection of Contemporary Native Art.” 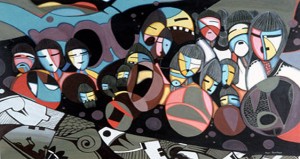 Today the Museum of Contemporary Native Arts strives to continue a collecting practice that creates history for the future. The collection illustrates a continuity of Native thought and aesthetics that reinforces scholarship by collecting works that speak to earlier dialogues and continuing discussions of how Native expression informs and challenges mainstream perceptions of Native art and culture. As the collection grows and becomes more accessible in the coming years through virtual exhibits, an online database and an open storage facility, it will not only help to inspire the next generation of artists that will most likely be represented within the collection itself but it will also better inform the next generation of Native art scholars.