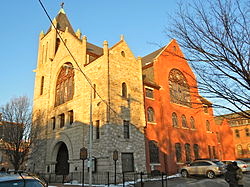 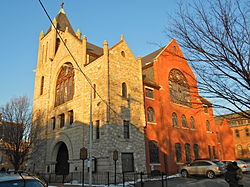 The Mother Bethel African Methodist Episcopal Church was founded in 1794 by Richard Allen, an African-American Methodist minister. The church has been located at the corner of Sixth and Lombard Streets in Philadelphia, Pennsylvania, since that time, making it the oldest church property continuously owned by African Americans. The church was organized by African-American members of St. George’s Methodist Church who walked out due to racial segregation in the worship services. 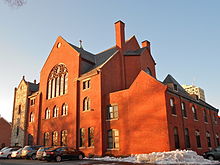 View from the south

It was one of the first African-American churches in the United States, dedicated July 29, 1794, by Bishop Francis Asbury. On October 12, 1794, Reverend Robert Blackwell announced that the congregation was received in full fellowship in the Methodist Episcopal Church. The current church, constructed in 1888-1890, has been designated a National Historic Landmark.

In 1816 Allen brought together black congregations from the region to organize the new African Methodist Episcopal Church denomination. He was elected bishop of this church.

Allen and his wife, Sarah Allen are both buried at the Church.