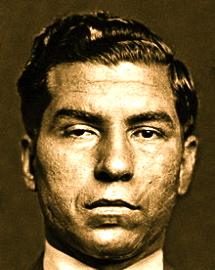 The Life of Carles “Lucky” Luciano 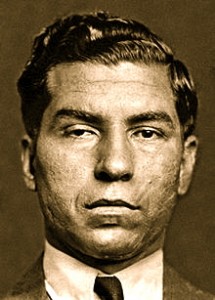 Charles “Lucky” Luciano (pronounced /luːtʃˈɑːnɵ/; born Salvatore Lucania November 24, 1897 – January 26, 1962), was a Sicilian-born American mobster. Luciano is considered the father of modern organized crime in the United States for the establishment of the first Commission. He was for many years, the head of the modern Genovese crime family. He was, along with his associate Meyer Lansky, instrumental in the development of the National Crime Syndicate in the United States.

Salvatore Lucania was born on November 24, 1897 in Lercara Friddi, Sicily. Luciano’s parents, Antonio and Rosalia Lucania, had four other children: Bartolomeo (born 1890), Giuseppe (born 1898), Filippa (born 1901), and Concetta. Luciano’s father worked in a sulfur mine in Sicily. In 1907, when Luciano was nine years old, the family immigrated to the United States. They settled in New York City in the borough of Manhattan on its Lower East Side, a popular destination for Italian immigrants. At age 14, Luciano dropped out of school and started a job delivering hats, earning $7 per week. However, after winning $244 in a dice game, Luciano quit his job and went to earning money on the street. That same year, Luciano’s parents sent him to the Brooklyn Truant School. 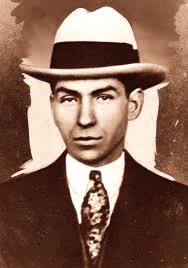 As a teenager, Luciano started his own gang and was a member of the old Five Points Gang. Unlike other street gangs whose business was petty crime, Luciano offered protection to Jewish youngsters from Italian and Irish gangs for 10 cents per week. He was also learning the pimping trade in the years around World War I. Around this time, he also met Meyer Lansky, his future business partner and close friend.

It is not clear how Luciano earned the nickname “Lucky.” It may have come from surviving a severe beating by three men in the 1920s, as well as a throat slashing. This was because Luciano refused to work for another mob boss. From 1916 to 1936, Luciano was arrested 25 times on charges including assault, illegal gambling, blackmail and robbery, but spent no time in prison. The name “Lucky” may have also been a mispronunciation of Luciano’s surname “Lucania.”

On January 17, 1920, the Eighteenth Amendment to the U.S. Constitution was ratified, and Prohibition lasted until the amendment was repealed in 1933. The Amendment prohibited the manufacture, sale, and transportation of alcoholic beverages. As there was still a substantial demand for alcohol, this provided criminals with an added source of income.

By 1920, Luciano had met many future Mafia leaders, including Vito Genovese and Frank Costello, his longtime friend and future business partner through the Five Points Gang. The same year, Lower Manhattan gang boss Joe Masseria recruited Luciano as one of his gunmen. Around that same time, Luciano and his close associates started working for gambler Arnold “The Brain” Rothstein. Rothstein immediately saw the potential windfall from Prohibition and educated Luciano on running bootleg alcohol as a business. Luciano, Costello, and Genovese started their own bootlegging operation with financing from Rothstein.

Rothstein served as a mentor for Luciano; among other things, Rothstein taught him how to move in high society. In 1923, after a botched drug deal damaged Luciano’s criminal reputation, he bought 200 expensive seats to the Jack Dempsey–Luis Firpo boxing match in the Bronx and distributed them to top gangsters and politicians. Rothstein then took Luciano on a shopping trip to Wanamaker’s Department Store in Manhattan to buy expensive clothes for the fight. The strategy worked, and Luciano’s reputation was saved.

By 1925, Luciano was grossing over $12 million a year. He had a net income of around $4 million each year after the costs of bribing politicians and police. Luciano and his partners ran the largest bootlegging operation in New York, one that also extended into Philadelphia. He imported Scotch whisky from Scotland, rum from the Caribbean, and whisky from Canada. Luciano was also involved in illegal gambling. 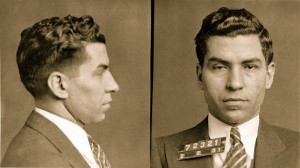 Luciano soon became a top aide in the Masseria organization. In contrast to Rothstein, Masseria was an uneducated man with poor manners and limited managerial skills. By the late 1920’s, Masseria’s main rival was boss Salvatore Maranzano, who had come from Sicily to run the Castellammarese clan activities. Maranzano didn’t want to pay commission to Masseria, and the ensuing rivalry eventually escalated into the infamous Castellammarese War, which raged from 1928 to 1931 and resulted in the deaths of both Maranzano and Masseria.

Masseria and Maranzano were so-called “Mustache Petes”: older, traditional Mafia bosses who had started their criminal careers in Italy. They believed in upholding the supposed Old World Mafia principles of “honor,” “tradition,” “respect,” and “dignity.” These bosses refused to work with non-Italians, and were even skeptical of working with non-Sicilians. Some of the most traditional bosses only worked with men with roots in their own Sicilian village. Luciano, in contrast, was willing to work with Italian, Jewish, and Irish gangsters. For this reason, he was shocked to hear traditional Sicilian mafiosi lecture him about his dealings with close friend Frank Costello, whom they called “the dirty Calabrian.” 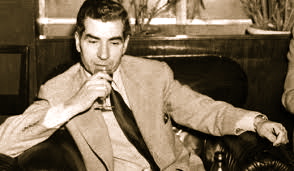 Luciano soon began cultivating ties with other younger mobsters who had been born in Italy, but began their criminal careers in the United States. Known as the Young Turks, they chafed at their bosses’ conservatism. Luciano wanted to use lessons he learned from Rothstein to turn their gang activities into criminal empires. As the war progressed, this group came to include future mob leaders such as Costello, Vito Genovese, Albert Anastasia, Joe Adonis, Joe Bonanno, Carlo Gambino, Joe Profaci, Tommy Gagliano, and Tommy Lucchese. The Young Turks believed that their bosses’ greed and conservatism were keeping them poor while the Irish and Jewish gangs got rich. Luciano’s vision was to form a national crime syndicate in which the Italian, Jewish, and Irish gangs could pool their resources and turn organized crime into a lucrative business for all.

In October 1929, Luciano was forced into a limousine at gun point by three men, beaten and stabbed, and dumped on a beach on Staten Island. He somehow survived the ordeal but was forever marked with a scar and droopy eye. The identity of his abductors was never established. When picked up by the police after the beating, Luciano said that he had no idea who did it. However, in 1953, Luciano told an interviewer that it was the police who kidnapped and beat him. Another story was that Maranzano ordered the attack. The most important consequence of this episode was the press coverage it engendered, introducing Luciano to the New York public. 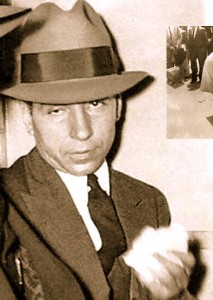 1931 New York Police Department mugshot of Lucky Luciano. In early 1931, Luciano decided to eliminate Masseria. The war had been going poorly for Masseria, and Luciano saw an opportunity to switch allegiance. In a secret deal with Maranzano, Luciano agreed to engineer Masseria’s death in return for receiving Masseria’s rackets and becoming Maranzano’s second-in-command.

On April 15, 1931, Luciano invited Masseria and two other associates to lunch in a Coney Island restaurant. After finishing their meal, the mobsters decided to play cards. At that point, Luciano went to the bathroom. Four gunmen – Genovese, Anastasia, Adonis and Benjamin “Bugsy” Siegel – then walked into the dining room and shot and killed Masseria and his two men. With Maranzano’s blessing, Luciano took over Masseria’s gang and became Maranzano’s lieutenant. The Castellammarese War was over.

With Masseria gone, Maranzano divided all the Italian-American gangs in New York City into Five Families. As per his original deal with Maranzano, Luciano took over the old Masseria gang. The other four families were headed by Maranzano, Profaci, Gagliano, and Vincent Mangano. Maranzano promised that all the families would be equal and free to make money. However, at a meeting of crime bosses in Upstate New York, Maranzano declared himself capo di tutti capi, the absolute boss of organized crime in America. Maranzano also whittled down the rival families’ rackets in favor of his own. Luciano appeared to accept these changes, but was merely biding his time before removing Maranzano. Although Maranzano was slightly more forward-thinking than Masseria, Luciano had come to believe that Maranzano was even more greedy and hidebound than Masseria had been. 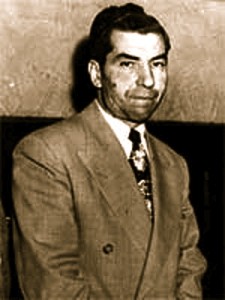 By September 1931, Maranzano realized that Luciano was a threat, and hired Vincent “Mad Dog” Coll, an Irish gangster, to kill him. However, Lucchese alerted Luciano that he was marked for death. On September 10, Maranzano ordered Luciano and Genovese to come to his office at 230 Park Avenue in Manhattan. Convinced that Maranzano planned to murder them, Luciano decided to act first. He sent to Maranzano’s office four Jewish gangsters whose faces were unknown to Maranzano’s people. They had been secured with the aid of Lansky and Siegel, who were both Jewish. Disguised as government agents, two of the gangsters disarmed Maranzano’s bodyguards. The other two, aided by Tommy Lucchese, who was there to point Maranzano out, stabbed Maranzano multiple times before shooting him.

This assassination was the first of what would later be fabled as the “Night of the Sicilian Vespers.” Then on September 13 the corpses of two other Maranzano allies, Samuel Monaco and Louis Russo were retrieved from Newark Bay, showing evidence of torture. Meanwhile Joseph Siragusa, leader of the Pittsburgh crime family, was shot to death in his home. The October 15 disappearance of Joe Ardizonne, head of the Los Angeles crime family, would later be regarded as part of this alleged plan to quickly eliminate the old-world Sicilian bosses. The idea of an organized mass purge, directed by Luciano, is a myth, however.