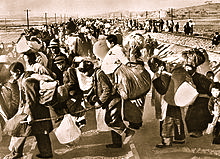 An interview with Korean War Veteran Richard Higgs at MCRD (marine corp recruit depot) San Diego on his experiences during the Korean War.

An interview with Korean War Veteran Richard Higgs at MCRD (marine corp recruit depot) San Diego on his experiences during the Korean War. 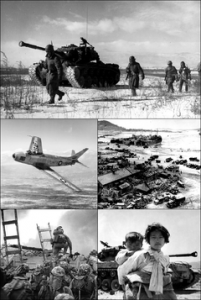 The Truman Administration was caught at a crossroads. Before the invasion, Korea was not included in the strategic Asian Defense Perimeter outlined by Secretary of State Acheson.   Military strategists were more concerned with the security of Europe against the Soviet Union than East Asia. At the same time, the Administration was worried that a war in Korea could quickly widen into another world war should the Chinese or Soviets decide to get involved as well.  One facet of the changing attitude toward Korea and whether to get involved was Japan. Especially after the fall of China to the Communists, “…Japan itself increasingly appeared as the major East Asian prize to be protected”. U.S. East Asian experts saw Japan as the critical counterweight to the Soviet Union and China in the region. While there was no United States policy that dealt with South Korea directly as a national interest, its proximity to Japan pushed South Korea to the fore. “The recognition that the security of Japan required a non-hostile Korea led directly to President Truman’s decision to intervene… The essential point… is that the American response to the North Korean attack stemmed from considerations of US policy toward Japan.”

The United States wanted to shore up Japan to make it a viable counterweight against the Soviet Union and China, and Korea was seen as integral to that end. 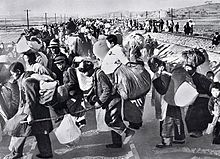 Hundreds of thousands of South Koreans fled south in mid-1950 after the North Korean army invaded.

The other important part of committing to intervention lay in speculation about Soviet action in the event that the United States intervene. The Truman administration was fretful that a war in Korea was a diversionary assault that would escalate to a general war in Europe once the U.S. committed in Korea. At the same time, “[t]here was no suggestion from anyone that the United Nations or the United States could back away from [the conflict].”  In Truman’s mind, this aggression, if left unchecked, would start a chain reaction that would destroy the United Nations and give the go ahead to further Communist aggression elsewhere. Korea was where a stand had to be made, the difficult part was how. The UN Security council approved the use of force to help the South Koreans and the US immediately began using air and naval forces in the area to that end. The Administration still refrained from committing on the ground because some advisors believed the North Koreans could be stopped by air and naval power alone.

Also, it was still uncertain if this was a clever ploy by the Soviet Union to catch the U.S. unawares or just a test of U.S. resolve. The decision to commit ground troops and to intervene eventually became viable when a communiqué was received on 27 June from the Soviet Union that alluded it would not move against U.S. forces in Korea. “This opened the way for the sending of American ground forces, for it now seemed less likely that a general war—with Korea as a preliminary diversion—was imminent.”  With the Soviet Union’s tacit agreement that this would not cause an escalation, the United States now could intervene with confidence that other commitments would not be jeopardized.