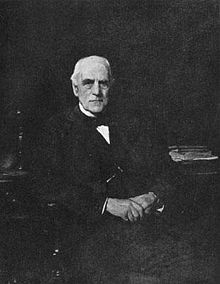 Junius Spencer Morgan was born on April 14, 1813 in Holyoke, Massachusetts. The Morgan name is traced to Carmarthen, Wales, and the first known Morgan family ancestral is Hyfaidd ap Bleddri, third son of Bledri of Wales. Miles Morgan]], ancestor to the Morgan family in America, emigrated from Bristol, England to Boston in 1636.

Morgan began his business career in 1829 by entering the employ of Alfred Welles of Boston. He had inherited wealth from his father, Joseph Morgan and showed great business ability. He was soon invited to become a partner in the house of J. M. Beebe & Co., one of the largest retail stores in Boston and one of the largest dry goods importing and jobbing house in the country. He was in the dry goods business from about 1836 to 1853.

After some years, he met George Peabody, the well-known London banker. Shortly after the meeting, in 1854, Morgan entered Peabody’s prosperous firm, George Peabody & Co. as a partner. Ten years later, in 1864, Morgan succeeded Peabody as head of the firm and changed its name to J. S. Morgan & Co. During the American Civil War the firm was appointed the financial representatives in England of the United States government.

In 1836, Morgan married Juliet Pierpont (1816–1884). He contributed money to his church and to Trinity College, Hartford.